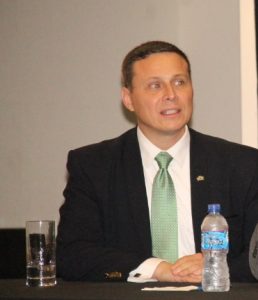 Chief of Mission of the American Embassy in Guyana, Terry Steers-Gonzalez.

The United States (US) wants to see Guyana’s telecommunications sector liberalized while at the same time ensuring that contracts are not violated.

Deputy Chief of Mission of the American Embassy in Guyana, Terry Steers-Gonzalez’s comments come against the background of impending negotiations between government here and the Guyana Telephone and Telegraph Company (GTT), a company that is 80-percent owned by the US-based  Atlantic Tele-Network.

“We ask that you participate in the liberalization of the telecommunications sector. Strong regulatory structures that protect both consumers and businesses are good for everyone, but remember that sanctity of contracts and respect for agreements are important for future investments,” he told the annual dinner and awards ceremony of the Georgetown Chamber of Commerce and Industry (GCCI).

GTT’s contract has provided for a monopoly on international voice and data, an enjoyment that has been virtually broken up because numerous netcafes offer overseas phone calls, there are wireless / satellite internet providers. A top GTT official says that telecoms provider loses about US$10 million annually as a result of one illegal phone operator “who operates with seeming impunity” despite complaints to the regulatory agency, government and private sector organisations.

Demerara Waves Online News was told that government and GTT have already identified their teams to begin negotiations before the end of December. The talks are expected to address fears, concerns and possible obligations by existing investors.

Meanwhile the Ministry of Public Telecommunications is inviting comment to the proposed regulations of the modern Telecommunications Act that was passed earlier this year. After that process, the Commencement Order will be signed to activate the legislation which has been already assented by President David Granger.

The National Telecommunications Authority (NTA) is also expected to be established to deal with new applications and regulate all telecoms providers.

The US Deputy Chief of Mission says it’s important that future investors feel welcomes and are empowered to build partnerships and joint ventures with Guyanese businesses.