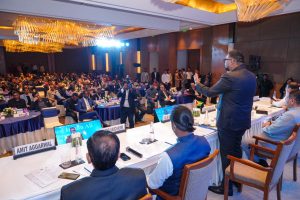 President Irfaan Ali addressing a Business Meeting during his recent visit to India.

President Irfaan Ali said Guyana has named its representatives members of a high-level Joint Working Group with India that would discuss that Asian nation’s interest in being a long-term buyer of this South American nation’s crude oil, upgrading Guyana’s police and military and investing in agriculture.

In the area of hydrocarbons, Dr Ali said he invited the Indian government to collaborate with Guyana  for the exploration and production of oil. He also invited the Indian private sector to participate in the bidding process for any of the 14 oil blocks offshore Guyana. While Guyana has sold India some of its share of oil being extracted from the Stabroek Block, the President said that country wants a long term arrangement. “They have expressed a strong interest in being a long-term purchaser of Guyana’s share of the oilso they are going to send in a proposal on that,” he said.

He said during last week’s visit to India, he offered Guyana’s assistance in creating trade and education linkages with the wider Caribbean Community (CARICOM) and Latin America.

The Indian government is expected to dispatch a special team on housing and urban planning to  assist with the development of a new town, Silica City, on the Linden-Soesdyke Highway, and the expanded urbanisation.

Vice President Bharrat Jagdeo is expected to lead a delegation to India next month to follow up on the groundwork that has been laid by the President.

Dr Ali said India has already promised to send a full team of technical experts to train Guyanese in horticulture especially youths and women given the potential for cut flowers. Also being explored is the cultivation of gluten-free, vitamin-rich millet which helps to prevent the onset of diabetes. India, he said was also keen on supporting the production of rice, sugar and dairy products by providing technology to improve efficiency, yield and profitability.

Guyana also stands to benefit from India’s Bio-Innovation Centre in the areas of biotechnology for agriculture, food and nutrition, and the environment.

Along with the regional food hub that would include neighbouring Brazil shipping its products and produce through Guyana’s ports to other countries, the President said India would assist Guyana in establishing a Regional Agro-Tech Campus that would be supported by regional universities, governments, private sectors and international organisations such as the Food and Agriculture Organisation. “What gthis tech hub will do , it will bring the technology to us. It will help us in designing an eco-system for high-value crops and the development of our food system to meet our regional and international needs,” he said.

The President of Guyana and the private sector were among several members of a Guyana delegation that met with many government and private sector leaders.