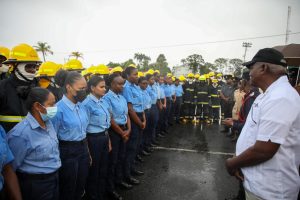 Emergency Medical Technicians (EMTs) of the Guyana Fire and Rescue Service are disappointed that they are ineligible for the one-month bonus for members of the Joint Services and have not been granted a salary increase although they are health care first responders.

“When responders went to the bank yesterday to check for the money, there was no money and some people are saying that we are not military or paramilitary. We were never employed by the Ministry of Health; we were never employed by the Georgetown Public Hospital so we want to know, then, who are we? Why this year we are not entitled to the money when the President made it clear that paramilitaries will remove the one-month tax free,” an EMT told Demerara Waves Online News. The MedTech said EMTs received the bonus last year.

The Permanent Secretary of the Ministry of Home Affairs, Mae Thomas told Demerara Waves Online News that according to the Finance Ministry’s circular, the EMTs  have not been identified to benefit from the 0ne-month bonus as are firefighters, soldiers and prison service personnel.

Ms Thomas said she was advised by her Accountant staff, only agents of the Customs Anti-Narcotics Unit (CANU), as civilians, would be paid the one-month bonus as the other Joint Services members. She believed that the EMTs were mixing up the health-workers bonus last year with the Joint Services bonus. “That is how come we paid our EMTs although they are not on the Ministry of Health payroll,” she said.

There are an estimated more than 90 EMTs who provide emergency health care for injured and sick persons who have to be rescued and taken to a h0spital.

Fire Chief Gregory Wickham earlier Saturday promised to check to ascertain whether the EMTs were entitled “because I am not aware in the first place that they are not receiving it or will not receive it.” He was also unaware whether EMTs have previously received the one-month bonus to members of the Joint Services. Subsequent calls to his phone went unanswered.

A MedTech also expressed disappointment that EMT Officer-in-Charge, who is a senior fire fighter, was not expected to provide any representation for his subordinates. “If you are our officer, we are under you, why would you not respond to say something?”.

EMTs receive their letters of appointment from the Ministry of Home Affairs. A number of them are contemplating taking industrial action if their grievance is not addressed.