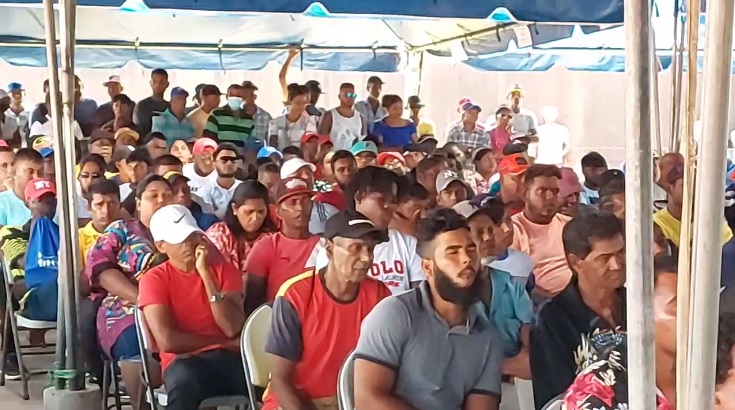 Vice President Bharrat Jagdeo on Friday accused Suriname of breaching a written agreement to grant 150 coastal fishing licences to Guyanese fisherfolk and warned that Guyana would take action against Surinamese companies if the issue was not resolved.

“We’ve worked with them, they have given commitments, they gave a commitment to the Minister of Agriculture in writing that we would get a hundred and fifty licences allocated to us; they reneged on that,” he said.

Mr Jagdeo’s position is in stark contrast to Suriname’s Agriculture Minister Parmanand Sewdien saying in April, 2022 that there was no agreement between the two countries. But the Vice President was adamant that Guyana had secured such a written commitment. “They denied they gave it although we have it in writing,” he said.

Addressing fisherfolk in East Berbice-Corentyne (Region Six), he also restated that Guyana would be taking the dispute to the 15-nation Caribbean Community (CARICOM).  “Our patience is being tested and we are going to write CARICOM on this matter and listen: These are different days,” he said. He said Guyana would be “escalating” the issue because Suriname has been reneging on its negotiations and “behind the scene commitments.” “You can’t trust a single word that they say even when they give you in writing so it’s time we have a different approach on this matter,” he added.

He did not say specifically under what provision of the Revised Treaty of Chaguaramas Guyana would be seeking recourse, but recalled that Trinidad and Tobago had once blocked Guyanese agricultural exports while companies from that twin-island nation have been investing in Guyana’s oil and gas sector. “We made it clear that you would treat our people with respect and there has to be reciprocity,” he said.  Mr Jagdeo warned that Surinamese companies that are being treated “fairly decently” in Guyana could soon face difficulties operating here if the fishing issue is not resolved. “They are making money here. Yet their government is harassing our fishermen so there has to be a different tactic now. We have to move away from just talking to them because it goes nowhere. We have to start playing hardball now,” he said.

The Vice President accused a senior Surinamese government official of being at the centre of alleged corrupt use of fishing licences. “What we have from Suriname is a tale of corruption; massive, massive corruption in the allocation of these licences and a huge attempt to profiteer on the backs of Guyanese fishermen by many in authority in Suriname and I’m saying this bluntly today because we have been tiptoeing around this issue for a long time,” he said.

He said the official was facilitating the granting of licences to Surinamese who were “renting the licences to Guyanese” and that information has since been provided to Surinamese authorities. Mr Jagdeo questioned whether Suriname’s President Chandrikapersad Santokhi was in charge because he had given the green light for Guyanese fisherfolk to land their fish in Guyana instead of Suriname but the Agriculture Minister has been doing otherwise. Surinamese law requires that fish caught in the waters of that neighbouring country be sold in that country.

Mr Jagdeo said Surinamese authorities have been harassing Guyanese fisherfolk by seizing and selling their boats.

Attorney General Anil Nandlall has been tasked with writing the Surinamese government over the seizure of Guyanese fishing vessels.