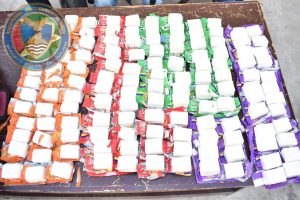 A United States-bound Guyanese woman was still in custody on Friday after she was allegedly caught with more than 11 kilogrammes of cocaine in biscuit wrappers, the Customs Anti-Narcotics Unit (CANU) said

CANU agents said the woman was held at the Cheddi Jagan International Airport (CJIA) with the suspected cocaine concealed in biscuit wrappers in her carry-on luggage.

She has been identified as 59-year old Unique Sunshine London of Lot 54 Haslington East Coast Demerara.

CANU said the narcotics tested positive for Cocaine and amounted to 11.188 kilogrammes with a street value of GY$12.3 million and US$336,000 if landed in the United States. The cocaine was found in numerous Shirley biscuit wrappers, based on pictures released by CANU. 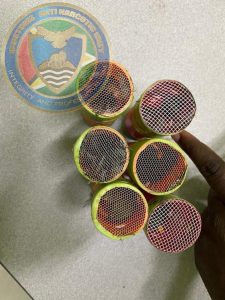 The finches concealed in the curlers.

Meanwhile, a man who allegedly checked in luggage for Ms. London, was arrested for allegedly attempting to smuggle six finches in hair curlers.

He is Dhanraj Deochand, of Perseverance, Essequibo.