Indo-Guyanese not being targeted- APNU+AFC 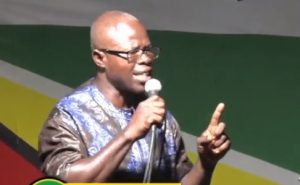 The opposition A Partnership or National Unity+Alliance For Change (APNU+AFC) and the Working People’s Alliance (WPA) Saturday night , in the wake of condemnations by the People’s Progressive Party Civic-led administration that it is engaging in widespread discrimination against Afro-Guyanese, denied that it was targeting Indo-Guyanese.

“Let me say to my Indian brothers and sisters…I am saying to you: when we talk about an Indian dominated government discriminating against Black people, we are nit being racist. We are not attacking Indo-Guyanese; we are attacking a system of divide and rule; a system that is designed to fatten those at the top and squeeze each and everyone of us regardless of if you black, red or green down at the bottom,” WPA Executive member Kidackie Amsterdam told a public meeting at Golden Grove, East Coast Demerara.

He reflected on the racial unity between Afro and Indo Guyanese in uniting against People’s National Congress (PNC)-led Forbes Burnham administration in the 1970s and 1980s. “Now, the boot is on the other foot and so when we are fighting against this oppression, it is quite unfair and I dare say stupid for our Indian brothers and sisters to sit back and say ‘dem racist’. Look at the merit of the fight, why are we fighting,” he said.

AFC Leader Khemraj Ramjattan said that based on the evidence, Guyana was tending in the direction of apartheid, a South African system of segregation and discrimination against Blacks by Whites. “The more I think about it, there is an element of truth that we are getting to becoming an emerging apartheid state,” he said.

But President Irfaan Ali, speaking late last month in the Rupununi, dismissed accusations that his government was practicing racial discrimination. “When you elected us, as a government, all those who voted for us, you did not elect us to serve you alone. You elected us to serve all the people of this beautiful country and that is exactly what we are doing. We are elected by you to lead and to show you by example as to how we must serve all the people of this country and you must be proud that we are staying true to that mandate,” he said.

The Guyanese leader said it was due to electoral support that the PPP is in office and “that does not govern based on where you are from or how you look or how you support.”

In his address to the meeting at Golden Grove, Opposition Leader Aubrey Norton added that Indo-Guyanese were also complaining of neglect.

“Don’t buy the false narrative that all Indians are wealthy. When you go to these communities- and I go to them- you meet many Indo-Guyanese who tell you that they are not benefiting from oil and gas,” he said. 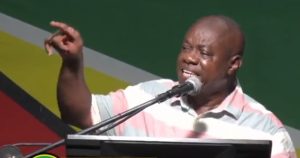 Mr Norton sought to guarantee that APNU+AFC was not singling out the affluent business community. “We are not against the rich businessmen but we are against taking all our resources and giving it to the PPP elite while our people punish,” he said.  Mr Norton added that a senior government official was responsible for a company, Western Logistics, that was getting many oil contracts.

Speaking for himself, Mr Norton said he is not a racist. “One of the things they do once you start to talk about injustice is to describe you as a racist so that you will back down. I know I am not a racist. I know I have lectured for years at the University of Guyana and there was not one student of any ethnic group who can accuse me of being unfair; I’ve worked in the public service and there is nobody from any ethnic group that can accuse me of being unfair,” he said.

The Attorney General, Anil Nandlall has said that it is a violation of Guyana’s constitution and the Racial Hostility Act to peddle claims of apartheid. He has listed several examples of Afro-Guyanese occupying senior elected and public service offices among others.