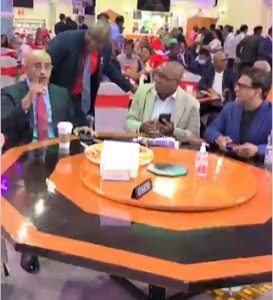 Vice President Bharrat Jagdeo on Sunday denied that the meetings to which the United States (US) government invited him and President Irfaan Ali were triggered by opposition concerns about the way Guyana was being run, but instead about  America’s importance to Guyana’s national interest.

“The key issue here was looking out for national interest and the national interest of Guyana is best served through strong, friendly relations with Washington and, therefore, we sought systematically to improve that relationship,” he said.

He explained that Guyana was also relying on the US’ continued support against Venezuela’s claim to the mineral and forest-rich Essequibo Region. “The United States of America has supported us strongly in terms of preservation of our sovereignty and territorial integrity, As you all know, we now have a case before the International Court(of Justice) and it is critical that we brief the US administration and secure their continue support for Guyana in that process,” Mr Jagdeo said.

With the US apparent softening of its sanctions on Venezuela and allowing oil exports from that neighbouring South American nation, Mr Jagdeo said a number of American senators have remarked that Guyana was emerging as a more secure supplier. “A number of senators said to them your best bet with energy security is Guyana because Guyana can ramp up its production faster than Venezuela and Guyana is friendly country to the United States of America so they have national security issues too that they want to pursue with Guyana,” he said.

Addressing Guyanese at an event held in Queens, New York, Mr Jagdeo dismissed claims by critics that the People’s Progressive Party Civic (PPPC) administration was selling out Guyana’s national interest and that the Guyanese delegation was “summoned” to Washington DC to be lectured by the US administration because the opposition A Partnership for National Unity (APNU) had convinced the Joe Biden administration that what was happening in Guyana was “inimical to sections of our people.”  APNU+Alliance For Change have been accusing the government of discrimination against Afro-Guyanese.

“This is all patently false,” he said, adding that the criticisms amounted to a “great deal of jealousy” of President Ali’s engagement with the US administration at “such a high level.”  Mr. Jagdeo said the opposition was hoping to steer US congressional political leaders in a certain direction and were now fearful that their lies were going to be exposed. “It was absolutely a different tone of the meeting in Washington and we’re looking forward to building on this greater understanding of the challenges,” he said.

Opposition Leader Aubrey Norton is on record as saying that the opposition’s advocacy with US representatives in Guyana had influenced the talks between the President and the US government, but he remained pessimistic that little would be done to address discrimination and corruption.  According to the Vice President, the US shares a lot of the values  such as a free and democratic society as expressed in periodic free and fair elections.

After holding separate talks with President Ali, US Secretary of State Antony Blinken and Vice President Kamala Harris had tweeted about the need for inclusionary growth, transparency, inclusive democracy and economic development for all Guyanese. In discussions with Mr Blinken, Dr Ali also cited the importance for transparency and accountability.

Vice President Jagdeo sought to rebuff claims that the Ali delegation to Washington was “lectured” about inclusive growth, saying that the PPPC’s election manifesto “speaks to that” which would include constitutional strengthening of the electoral process. “When Washington mentions this,  they are mentioning things that are part of our manifesto that we concluded on …” he said. Referring to Rickford Burke, who has consistently accused the PPPC of anti-Black racism, Jagdeo said he was peddling lies and “misleading a lot of people here.”

Mr. Jagdeo said during the trip the Guyanese delegation “had to demonstrate to Washington” how the oil revenues were going to be managed under a simplified Natural Resource Fund legislation in contrast to the 2019 version that had been passed by the APNU+AFC coalition administration.

The former Finance Minister restated that Guyana’s oil and gas revenues would be spent on a “massive roll out” of infrastructural development and investment on the social sectors to crowd in other investments and avoid the Dutch Disease.