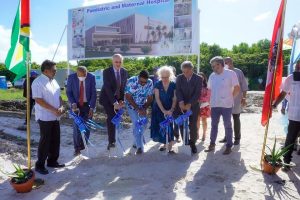 As the sod was turned to construct a €$149million (more than US$150 million) paediatric and maternal hospital, the Guyana government on Sunday announced that contractors would have to abide by new internationally recognised contract terms that would see them bearing the bulk of the responsibilities for the design and build infrastructure model.

The hospital, which would be built on 10 acres of land at Ogle, East Coast Demerara, would aim to reduce the number of women dying due to childbirth and also facilitate heart surgeries on children. Health Minister Dr Frank Anthony told the turning-of-the-sod ceremony. “This is really going to be a fantastic project for Guyana; a project that will really change the health landscape of this country and I dare say that this is just the beginning of a wave of projects in health that is going to be totally transformational,” he said.

The hospital is expected to be completed in two years.

President Irfaan Ali said “everything” in relation to that project was being done in keeping with the  Fédération Internationale des Ingénieurs-Conseils/ International Federation of Consulting Engineers (FIDIC) Yellow Book standards. “That’s something new, too,” he said, adding that he has asked that technical personnel at the Ministry of Public Works to arrange a training session for the media and stakeholders on FIDIC standards. “It is important that we know what the FIDIC Yellow Book standards are; very, very high standards and those are the standards that we’re working with these days,” he said. Dr Ali said the hospital project was developed based on the FIDIC Yellow Book.

The hospital marks the first time that United Kingdom Export Finance (UKEP) would be financing a project  in Guyana. Construction  of the level five healthcare institution at Ogle, East Coast Demerara would be done by the Austrian company, VAMED Engineering. “They have analysed the country, they have analysed the vision. They won’t invest in a hospital that they don’t see the results as important to the county’s development,”  Dr Ali said.

United Kingdom High Commissioner to Guyana, Jane Miller remarked that UKEP provides countries with “really good quality finance at very good interest rate as long as certain amount of UK content goes into it.” She said most of the “really high quality” equipment that would be installed at the paediatric and maternal hospital would be made in the UK. She indicated that talks were continuing with Finance Minister Dr Ashni Singh for Guyana to tap into more UKEP funds.  The President immediately remarked that he hoped that the EU and the US would soon provide Guyana with similar finance.

Global Arbitration Review states that the contractor accepts a fitness for purpose obligation for the Works, including the design. The payment mechanism for the Yellow Book is lump sum fixed price, with provision for progress payments on the basis of Engineer certification.

The FIDIC Yellow Book Standard also focusses heavily on dispute avoidance rather than arbitration for design and build projects. The new FIDIC Yellow Book also states that contractors cannot take action against employers  for all acts, errors or omissions by the contractor in carrying out his design obligations that result in the those works not being fit for purpose.

Analysts say that Yellow Book rules increase the contractor’s risk including exceeding quantities while the employer bears the risk of less quantities as contemplated by the parties at tender stage.

In the new FIDIC Yellow Book, the employer has an unrestricted right to terminate the Contract for its convenience and execute the Works himself or to arrange for the Works to be executed by another contractor, provided that the Contractor has received the payment(s) to be made by the Employer in connection with the termination.