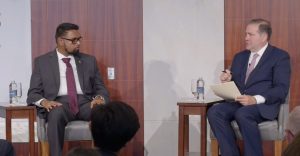 Guyana’s President Irfaan Ali said the United States (US) has begun ending decades of “neglect” of the Caribbean, with a US$2 billion line-of-credit now being available to the Caribbean Community (CARICOM) as evidence of a tangible move to claw back influence in the region from China.

“I mean, look at this this week here; we have been able to accomplish very strategic things. Some things that are historic. Today we signed an MOU (Memorandum of Understanding) with the EXIM Bank. And if you look, sometimes we look at things narrowly,…if you look at financing from the EU, and financing from the US, you actually can compete and out compete, but the information is not there,” he said.

The US$2 billion offer would be used mainly to finance mainly government projects and also facilitate US private sector investments in Guyana.

The Guyanese leader said after the June 6-10 Summit of the Americas in Los Angeles, California where the US government was encouraged again to become more aggressive in Latin America and the Caribbean, there was an evident shift in Washington’s posture towards the Caribbean Community (CARICOM). “After the Summit of the Americas, I can say there has been an enormous move to rectify this,” he said, adding that three sub-committees, which are co-chaired by the US and CARICOM,  have been established to focus on the region’s priorities.

“I think the US, and they have done this with the leaders, acknowledges that that there has been some resetting that was required and I am very confident sitting here that that process of reset has started. The level of seriousness and priority that the region has been given has been reignited and we are hoping that this can continue in an aggressive manner,” he said.

He told an interactive forum at the Washington DC-based Center for Strategic and International Studies (CSIS) that Guyana and the Caribbean relations with China was largely about getting support for its development priorities and projects. He said that at the Summit of the Americas that was held last April, concerns had been raised about the waning priority that the US had placed on the Caribbean.  “There is a great view in the region- and this was before the Summit of the Americas- that there has been some amount of neglect for the CARICOM region by the US and that was officially raised,” he said.

Senior Vice President; William A. Schreyer Chair; Director, Project on Prosperity and Development; and Director, Americas Program at the CSIS, Daniel F. Runde that a  study conducted 18 months ago shows that the US “simply neglect the Caribbean”. He praised Guyana for attending the Summit of the Americas when there was uncertainty about the participation of a number of Caribbean leaders.

The President said Guyana and US were also working very closely on security especially because of his country’s geographic location.

Opposition Leader Aubrey Norton has since said he does not expect the Irfaan Ali-led administration to deliver on promises of shared prosperity, inclusive growth and transparency made in the US.

The US has provided millions of dollars worth of vaccines and other supplies to help fight COVID-19, cushion the impact of annual storms and fight transnational crimes such as drugs, arms, corruption, people smuggling and human trafficking.

2022-07-27
Denis Chabrol
Previous: US provides US$2 billion to Guyana; Ali wants “greater US participation” in Guyana’s development
Next: No salaries for suspended parliamentarians