US provides US$2 billion to Guyana; Ali wants “greater US participation” in Guyana’s development 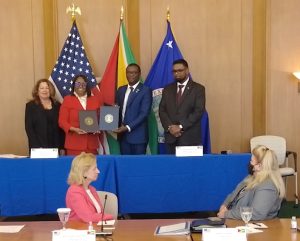 President Irfaan Ali looks on as Foreign Minister Hugh Todd and the Head of the US EXIMBANK display the signed memorandum of understanding that makes available US$2 billion.

Guyana on Wednesday appeared to have made a major shift in its international financing relations with the inking of a US$2 billion deal with the United States’ Export-Import (EXIM) Bank for government projects and hailing the importance of Washington to the South American nation’s development.

“In this development phase of our country we want to see greater US participation not only from the government but from the private sector,” he said in Washington DC at the signing of the memorandum of understanding.

The accord was signed less than two days after the US and Guyana committed to work together to ensure shared prosperity, inclusive growth and transparency and accountability

Traditionally, Guyana has been obtaining concessional bilateral financing from India and China’s EXIMBANKs and more recently from the Islamic Development Bank. Guyana also recently made a pitch to a Saudi Arabia investment delegation and has decided to establish a Saudi Arabia desk at the Ministry of Finance.

Back in October, 2020, the United States government-run bank, the International Development Finance Corporation,  had hoped to finance businesses that would be keen on building high quality infrastructure projects if companies were to win competitive bids.

The President indicated that prior to Wednesday’s signature, Guyana had experienced difficulty in obtaining soft financing. “One of the in factors has always been the ease of access to financing and the barriers to financing. This today is the single most important signal not only for Guyana but for the region. The United States, through one of its agencies- the EXIMBANK- is serious about the commitment and promise to this region, the CARICOM region,” he said.

Dr Ali said the way was now clear for the private sectors of the US and Guyana to move forward “aggressively” and make full use of that opportunity.

Under the agreement, the parties agreed to explore options for utilising EXIM’s standard instruments, which include direct loans and medium- and long-term guarantees, to finance US exports to Guyana for Government projects totalling US$2bn.

“I think we can applaud ourselves and EXIM Bank for this dynamic, futuristic, and bold move in advancing this relationship and this cause, and the areas we have identified shows the broad and multifaceted nature of the leadership of EXIM Bank.”

Government said the memorandum of understanding also identifies a number of indicative sectors in which projects may be identified. These include but are not limited to infrastructure, including roads and bridges; energy, including renewable energy and emission reduction; telecommunications, including wireless technologies; water treatment and sanitation, including technologies and infrastructure, and agriculture.

“This is what we’re talking about, not a simple MoU, but an MoU that has the potential of unlocking all of this. The focus on energy, renewable energy, that allows us to advance on the path of goals and targets we set at COP26 and beyond. It shows our commitment on cleaner energy, advancing sustainable and resilient development,” he added.

President Ali committed to working “aggressively” and “proactively” in pursuit of the full realisation of the MoU while ensuring that all parties emerge as “winners”.

The President also invited the bank’s hierarchy, including its President and Chair Reta Jo Lewis to visit Guyana with the US private sector to meet with the Government and the local private sector in Guyana to solidify the projects.

An American business delegation visited Guyana and recently held talks with the President and other top government officials.

2022-07-27
Denis Chabrol
Previous: US Secretary of State says inclusion, transparency among priorities for relations with Guyana; Norton not hopeful of change
Next: US rekindles attention to Caribbean- Pres Ali