US Secretary of State says inclusion, transparency among priorities for relations with Guyana; Norton not hopeful of change 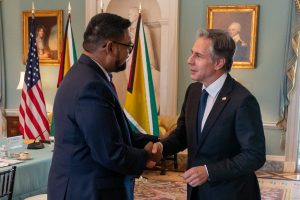 President Irfaan Ali and US Secretary of State, Antony Blinken.

United States (US) Secretary of State, Antony Blinken has identified the need for inclusive growth and improved transparency  among key priorities for relations with Guyana, but Opposition Leader Aubrey Norton was Wednesday not optimistic that government would fix some of the problems.

Mr Norton was pessimistic that government would now take action following the talks with Mr Blinken and other top American policy and decision-makers in Washington DC because a number of government’s operatives were “greedy” and not interested in the fair distribution of wealth to all Guyanese regardless race or class. “I question the government’s capacity to do anything that is structured and institutional. The government clearly operates to benefit a few friends and family and I don’t hold out any hope that the government is going to in a structured way implement anything to ensure the people of Guyana benefit,” he said.

In a tweet on Tuesday, Mr. Blinken referred to the talks about US-Guyana bilateral relation with President Irfaan Ali on Monday. “Guyana remains a key partner as we work to bolster food and energy security, promote shared prosperity and inclusive growth, strengthen transparency, and safeguard the environment,” the US Secretary of State said in a tweet in which he tagged the Guyanese leader.

At the opening of Monday’s talks, the Guyanese leader said Guyana’s “balanced development strategy and in doing so staying true to the value system and principles that both of us believe so strongly in; that is democratic society where transparency and accountability and strong governance support the development of Guyana.”

Mr. Blinken’s call for inclusion appeared to be a reinforcement of previous statements over the past year by Chairman of the US  Congressional sub-committee on the Western Hemisphere Albio Sires, Congressman Hank Johnson, Congressman Hakeem Jeffries and President Joe Biden about the need for inclusion. Just over one year ago, Minister of Governance and Parliamentary Affairs had denied claims of political and discrimination by Congressmen Sires and Johnson. “We are pleased that our friends in the United States are monitoring Guyana and watching out for our interest and we wish to assure them that we will continue as a democratically elected government to stand by our constitution and the protection of rights,  the protection of rights of all Guyanese regardless of who they voted for and for what ethnic group they belong to, what gender they are and what part of Guyana they come from and what race,” she said had said.

Opposition Leader Norton noted that the talks between  President Ali and the Secretary of State followed discussions he held last week Thursday with US representatives who are concerned about the “absence of inclusive governance” and transparency. Touching on the issue of transparency, he believed that the American government was concerned that the oil wealth was not benefitting ordinary Guyanese.|
“While there are the diplomatic pleasantries, it is my sincere view that they were summoned to the United States because the United States is dissatisfied with their approach to governance in Guyana,” he said.

Speaking at the Wilson Center, President Ali acknowledged the importance of access to information to transparency. “Ensuring transparency and accountability requires the population to have access to information. There can be no secrets. The population must be aware of what is coming,” he said.  He explained that when oil revenues come in, the Finance Minister must release that information, the Sovereign Wealth/Natural Resources Fund Board is independent and so “we remove the political hand”, the National Assembly approves spending and the formula for the withdrawal of oil money from the Fund is simplified.

Mr Norton, a former Foreign Service Officer, believed that Dr Ali was “summoned” by the US to be told that that the People’s Progressive Party Civic was of governing based on American values such as respect for the rule of law and democracy.

He said the opposition A Partnership for National Unity+Alliance For Change (APNU+AFC) told the US that the democratic institutions needed to be strengthened or “find a new government if one is to have society that is governed based in the rule of law.” Key to the democratic process, he recalled telling the US, was the need for a “clean” voters list. “We believe that you can’t talk democracy and go into an election with a padded list,” he said.

The Opposition Leader cited the need for government to strengthen its capacity to audit cost oil because that would ultimately determine what happens with profit oil.

Concerning the US’ desire for inclusive growth, Mr Norton restated his accusation that the wealth of the nation was being siphoned off to the PPPC’s elite, family and friends to the detriment of Guyanese. “Even tho0ugh we have oil resources, the situation is getting worse because Guyana is getting worse than it was two years ago and so unless there is inclusive involvement of the people so that they benefit from oil and gas then we are in deep trouble,” he said.  Mr Norton cautioned that inequities and racial discrimination could lead to tensions and instabilities.

Mr Norton took some credit for the meeting between the President and US decision-makers, saying that the APNU+AFC has been reaching out to the diplomatic community in a structured manner as well revelations of alleged corruption reported by American medium, Vice News. “I think the ABCE (American, British, Canadian and European) countries are concerned that we are going down the wrong road…We have been very clear to point out the discrimination that the government meets out to people both political and ethnic and so I think in some regard the advocacy is working,” he said.

Top officials of the Alliance For Change (AFC) did not immediately respond to requests for comments.

Guyana, an emerging major oil and gas energy producer in Latin America, has said it would be striking a balance between protecting its standing forests to absorb greenhouse gases. The South American nation is also responsible for food security within the Caribbean Community (CARICOM) and the Summit of the Americas mechanism.