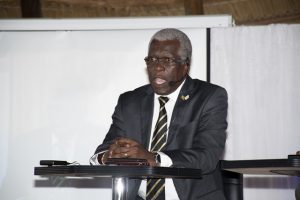 The Guyana government has publicly assured that the contract of the Director-General of the Guyana Civil Aviation Authority, Retired Lt. Col. Egbert Field that his contract would be renewed.

He has written to the government informing that his contract expires on August 2. “Mr. Field’s letter is being addressed with the view to the renewal of the contract,” Public Works Minister Juan Edghill said in a statement.

National Security Adviser, Gerry Gouveia pointedly stated that Mr. Field’s contract would be renewed. “Egbert Field has not resigned and he is 100% still at his desk doing his job. His contract will be renewed because he is highly appreciated and respected by the aviation industry,” he said on his Facebook page.

This amid concerns that the Director-General of the Guyana Civil Aviation Authority (GCAA), Egbert Field, is being frustrated by the Board and the Minister in the execution of his duties.

The minister ought to assure Guyanese that the government employs persons solely based on merit and he denies that the Director-General of the Civil Aviation Authority is being forced out of his job due to politics. We do not subscribe to views that are being peddled by some on the social media platforms that Mr. Field is being forced out of his job because of politics,” he was quoted as saying in a statement.

Since his assumption to office as GCAA Director-General  in August 2016, Guyana’s International Civil Aviation Organisation rating has increased to almost 80 percent.

Mr Field is respected globally in the field of aviation. He has served as Director, Flight Safety Department of the Jamaica Civil Aviation Authority (JCAA) and was Transnational Inspector for the Caribbean Aviation Safety and Security Oversight System (CASSOS).

2022-07-26
Denis Chabrol
Previous: OPINION: President and Vice President were not invited to Washington -they were summoned
Next: President recommits to key benchmarks in talks with US Secretary of State