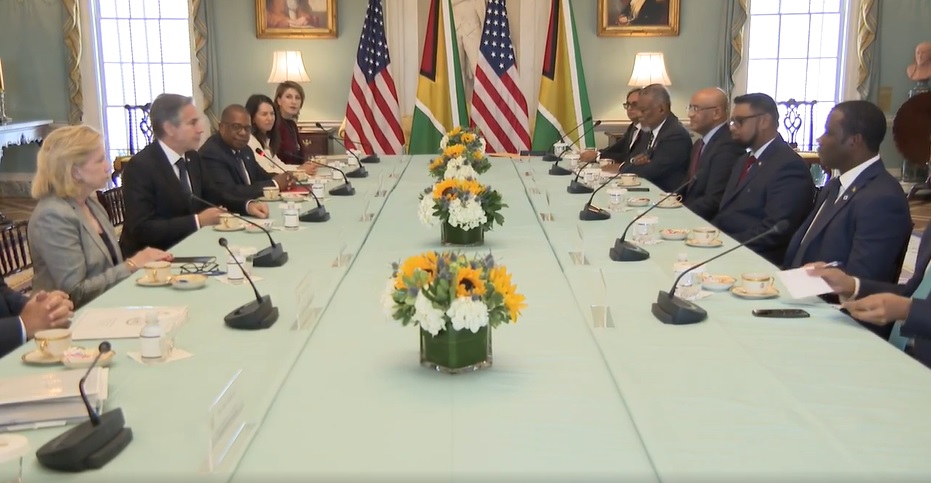 US Secretary of State Antony Blinken and President Irfaan Ali with their delegations at a meeting at the US State Department.

President Irfaan Ali  has cited the need for key aspects of good governance in Guyana’s development, in face-to-face talks with US Secretary of State Antony Blinken in Washington DC.

In a video release of opening remarks between the delegations of both sides, the Guyanese leader said Guyana’s “balanced development strategy and in doing so staying true to the value system and principles that both of us believe so strongly in; that is democratic society where transparency and accountability and strong governance support the development of Guyana.”

Both the People’s Progressive Party Civic (PPPC) and the People’s National Congress Reform-led opposition coalition of A Partnership for National Unity+Alliance For Change (APNU+AFC) have accused each other of rigging elections, corruption and discrimination.

The President also, in his remarks, described the US as an “important strategic partner” in addressing key issues of food security, energy security, debt relief and climate change. He again reiterated the need for preserving Guyana as a carbon sink for greenhouse gas emissions while capitalising on oil revenues for for a balanced approach to social and infrastructural development. “We are pursuing an energy path that seeks to balance our newly-found energy resource of oil and gas but we are not doing that to the detriment of our credentials on the environment and climate change,” he said. Guyana’s forest stores 19.4 gigatons of carbon.

Environmental activists have been criticising the Guyana government for allowing gas flaring from offshore production wells only with a cash penalty, and giving approval to new oil development and major infrastructural projects without the need for environmental impact assessments.

With Guyana having been assigned the responsibility of food security at the recently held Summit of the Americas, President Ali promised to continue providing “leadership” to the rest of the Caribbean Community (CARICOM) and that and other issues.

Secretary of State Blinken described Guyana as a “very strong partner for the United States and also in many ways a global leader” in finding solutions to a range of challenges. “We are eager to deepen and strengthen the partnership that we have on all these issues and more,” he said.

The Guyana government has said the meetings are being held at the invitation of the US government.  Guyana continues to maintain that it will continue to forge closer ties with other nations. Guyana has been engaging investors from China, Saudi Arabia and India.