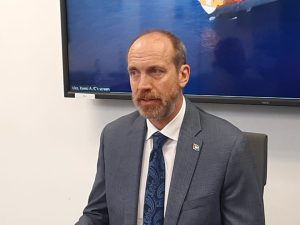 ExxonMobil on Tuesday said it has replaced a troublesome flash gas compressor aboard the oil production vessel, Liza Destiny, that has cost the company more than USD$10 million in fines for excess flaring, and said the old one is being overhauled to the latest standards for standby use.

Vice President of ExxonMobil Guyana , Mike Ryan said the new flash gas compressor was installed and started up in July, and “we have achieved background flare” of less than 1 million cubic feet (mcft) per day on that Floating Production, Storage and Offloading (FPSO) vessel.

While the flash gas compressor was down, he said ExxonMobil had received permission to flare 15 mcft per day but before the installation of the new unit the emission was less than 7 mcft. “While we weren’t at background, we worked extremely hard to minimise the amount of flare that we had and so full compliance with the regulations,” he said.

From May, 2021 to June, 2022, he said the company has paid more than US$10 million in fines to Guyana’s Environmental Protection Agency (EPA) for flaring.

He also announced that Liza Destiny was now producing 40,000 more barrels per day, above the previously stated 120,000 barrels per day as a result of an upgrade. “We did do some optimisation work. We call it production optimisation,” said Mr  Ryan who is also the Production Manager.

He said the equipment was being constantly monitored to finalise all records and close that chapter. “All compressors are running, injecting all the gas. We are in what you call an endurance run right now so we will run this machine over the next couple of months. What we’ll do is monitor every aspect of that machine to make sure that it’s acting as we expect and actually that it’s performing better than what we had planned,” he said.

Mr Ryan said the old flash gas compressor would be sent to Germany and upgrade it to the same specifications as the new one and “use it as a full spare.” Mr Ryan declined to say how much the problems with the flash gas compressor have cost ExxonMobil, instead only indicating that that was being picked up by Mann Energy and SBM Offshore who were responsible deliver a working compressor. “We hold SBM and Mann Energy who is the manufacturer of that compressor accountable to deliver on their expectations,” he said.

Meanwhile, he said Liza Unity has reached its target of 220,000 barrels per day, having already achieved background flare within 60 days of its start-up in February.

The third FPSO, Prosperity, is expected in Guyanese waters in 2023 for the Payara well development.

2022-07-26
Denis Chabrol
Previous: President recommits to key benchmarks in talks with US Secretary of State
Next: Guyana asks US to take action against persons allegedly perpetrating racial hostility, terrorism