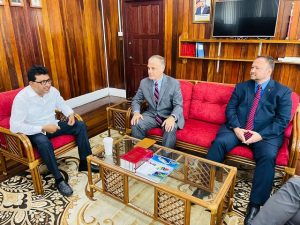 Attorney General Anil Nandlall meeting with officials of the US Federal Bureau of Investigations.

Attorney General Anil Nandlall on Tuesday said he again asked the United States’ Federal Bureau of Investigations (FBI) for help to crackdown on persons on American soil who are allegedly spewing race hate and fomenting terrorism in Guyana.

“He informed the team that the State of Guyana has already lodged formal complaints with various important offices and agencies in the United States on this matter, including the FBI and he is using this opportunity to reiterate those reports requesting actions from US authorities against these perpetrators who operate with impunity from the United States,” the Attorney General’s Chambers said in a statement about his talks with an FBI team.

When contacted to ascertain the status of those complaints, the Attorney General would only say that the complaints were being “actively considered.”

Mr. Markley is the lead officer of the FBI for the Caribbean region, including 27 countries  stretching from Bermuda to Guyana and is based in Bridgetown, Barbados. Mr.  Kreitensteid is the Assistant Legal Attache’ and is based in Port of Spain, Trinidad and  Tobago and Mr. Mayan is the Regional Security Officer representing the US State  Department in the Caribbean.

The Attorney General said he pointed to many persons who use Social Media platforms, in particular the US, to spew racial hostilities and create ethnic strife among segments of the Guyana population, inciting and aiding and abetting riotous conduct and even domestic terrorism in Guyana.

Mr. Nandlall emphasised that cyber space is the new emerging platform where serious criminal offences in Guyana and globally are being committed.

The Guyana Police Force in December 2021 issued a wanted bulletin for outspoken critic of the People’s Progressive Party Civic in and out of office. He has consistently accused that party of perpetrating racism against Afro-Guyanese.

Mr Burke has since  rejected that bulletin that states he is wanted for sedition and terrorism and racial hostility.  “Anybody who talks about it, they attempt to silence. I will not be silenced. I live in the United States of America- the greatest country in the world. The First Amendment of the United States Constitution gives me the  right to free speech. The Guyana government and the PPP does not have jurisdiction over anybody in the Diaspora, over no American citizen, over no Guyanese that live abroad and they will not infringe on my or anyone else’s constitutional right to speak out, to condemn racism,” he has said.