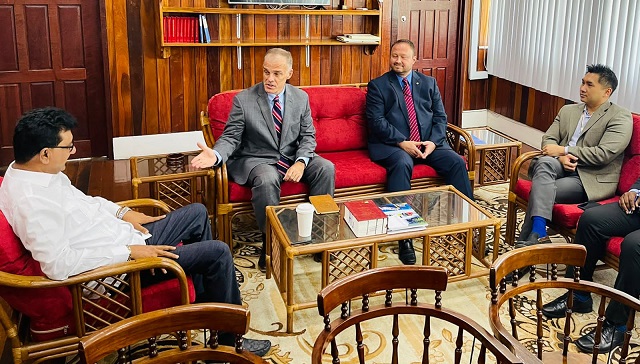 Attorney General Anil Nandlall meeting with officials of the US Federal Bureau of Investigations.

“The team wishes to intensify its relationship with the Government of Guyana in the investigation, prosecution, and in securing convictions in these types of offences,” Mr. Nandlall’s office said.

Referring to a meeting he had on Monday with senior FBI and  State Department officials, the Attorney General promised to assist the US in continuing to combat such criminal activities. “The Attorney General signaled the government’s continued commitment to the upholding of the rule of law in all its facets, including the pursuit of all forms of criminality, in particular organized crimes,” his office said in a statement.

The Guyanese Attorney General noted that over the years the FBI has been cooperating with Guyana in a number of areas including rendering mutual assistance in criminal matters, extradition, anti-money laundering and countering the financing of terrorism, trafficking of narcotics and firearms, tracing proceeds of organized crime and forfeiture of assets, trafficking in persons and cyber related criminal activities.

Mr. Markley is the lead officer of the FBI for the Caribbean region, including 27 countries  stretching from Bermuda to Guyana and is based in Bridgetown, Barbados. Mr.  Kreitensteid is the Assistant Legal Attache’ and is based in Port of Spain, Trinidad and  Tobago and Mr. Mayan is the Regional Security Officer representing the US State  Department in the Caribbean.

The Attorney General’s office said he discussed the various policies and training programs being pursued by the various law enforcement agencies intending to augment the State’s capabilities to investigate, prosecute and convict for criminal conduct, as well as the government’s robust legislative agenda.

The Attorney General’s Chambers, with support from the US, recently held a workshop on the forfeiture of assets. Participating agencies were the police force, Customs Anti-Narcotic Unit, Guyana Revenue Authority, Financial Intelligence Unit, Director of Public Prosecutions Chambers and the Bank of Guyana.

The meeting between the FBI officials and the Attorney General was being held the same day that President Irfaan Ali and his delegation were meeting with US Secretary of State Antony Blinken in Washington DC and other top US Congressional leaders.