Passengers in the Essequibo River on the edge of Leguan Island. (Screen grab from Chris Gopaul’s Facebook page)

The speedboat that sank earlier Saturday in Essequibo River was allegedly overloaded when it departed Parika bound for Supenaam, but no one perished as the captain quickly navigated the vessel to a mangroves on the edge of Leguan Island from where they were rescued.

“The boat come with people inside overload. Well, this is the result,” theatre and radio personality, Chris Gopaul said in a video on his Facebook page.

Up to late Saturday night, neither the Guyana Police Force nor the Maritime Administration (MARAD) issued a statement about the incident that occurred after 2 PM. Several adults either clung or sat on the mangrove trees as they awaited rescue boats. 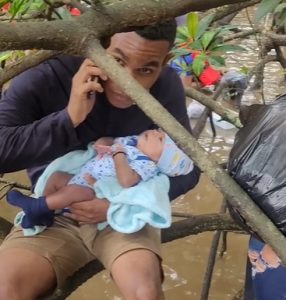 A passenger comforts a baby who was among the passengers aboard the ill-fated speed boat that went down just off Leguan Island, Essequibo River. (Screen grab from Chris Gopaul’s Facebook page)

“We are all fine. God is great and we have real heroes among us,” said Mr. Gopaul. “The guy with the baby sat there with someone else’s child,” he added. Another passenger, Kwasi Edmondson, also reportedly snatched a two or three year old child and jumped in the shallow area saving her life.

Also, Mr Gopaul said Michael Ignatius “was there lending a hand as well with a baby in his hands” and Clemencio Goddette “was in the water telling people to stay calm.”

According to pictures and videos posted by Mr Gopaul, a number of the passengers were also seen in waist-high water near the island.

Gopaul was among several dramatists who still made it to Washiba, Capoey, Essequibo Coast for a a scheduled performance.