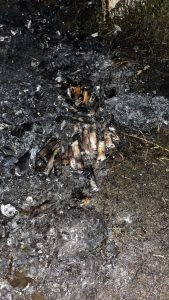 Burnt tubes of medication at the scene.

Residents of a section of Eccles, East Bank Demerara are going to bed under a thick cloud of smoke emanating from what appears to be a heap of drugs and medical supplies aback a building at Industrial Site, residents said.

A thick cloud of smoke was seen billowing over a residential section of the community.

The Guyana Fire Service confirmed that fire fighters were on the scene responding to a hazardous situation.

A resident in the area said the smoke smelled as if chemicals were burning. “I have asthmatic persons living in my household. It is affecting me greatly,” he said.

The smokey event began at about 5:30 PM Friday, but has since worsened into visible flames.

Based on burnt items at the scene, wood might have been stacked up and set alight with the medical supplies.

It is unclear who owns the building near the fire, but a source said he was informed that the fire was left unattended.