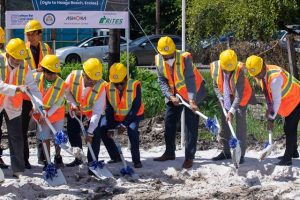 Top officials of the Guyana and Indian governments at the turning of the sod ceremony for the Ogle-to-Haags Bosch Road.

The State-owned Indian construction company, Ashoka Buildcon Limited, has been told to employ Guyanese and complete the project in a timely manner to the required specifications if it is to stand a good chance of being awarded future contracts in Guyana, officials said Friday.

“We expect that you will execute this project in line with the highest of standards in line with the specifications defined in the contract and we expect that you will d0 so in a timely manner. There is a lot of business to be done in Guyana and in order to make yourself eligible to that business…for the pipeline of work that is yet to come, the best recommendation will be successful and timely completion of this project,” Finance Minister Dr Ashni Singh said.

An Indian government company has also been hired to supervise the construction of the the Ogle, East Coast Demerara-to- Haags Bosch, East Bank Demerara Road. The cost of the 7.8 kilometre long four-lane road is more than US$106.4 million, with a US$50 million line of credit from India’s Export-Import Bank (EXIM).

Concerns have been raised in the past about the employment of numerous Chinese to construct buildings such as the government-owned building that houses the Marriott Hotel as well as several other Chinese-funded projects that have been awarded to companies from that Asian nation.

Stressing that the contract was awarded through a transparent public procurement process, he urged Ashoka Buildcon Limited to “make your mark here.”  He explained that the Indian company was awarded the contract because India is funding the project in keeping with Guyanese and Indian laws.

India’s High Commissioner to Guyana, Dr  J.K Srinivasa-describing Ashoka Buildcon Limited as a 40-year old publicly listed Fortune 500 infrastructure company as well as oil and gas, health care buildings, power transmission and distribution- encouraged that company to capitalise on “this experience and be a part of Guyana’s growth story.” “I hope that you’ll be able to finish this project before the contract period as your reputation speaks in India,” he said, adding that appointed project management consultant is Rail India Technical and Economic Service Limited.

The Indian diplomatic envoy appealed to the Guyana government to “assist this Indian company and to advise and guide them so that they can have an enabling environment to execute the contract.”

India’s latest projects in Guyana include a US$12.7 million new North-West District ferry, upgrade of regional hospitals at a cost of US$17.5 million, more drainage pumps valued at US$4 million, the installation of solar energy equipment to benefit 30,000 at a cost of US$7.3 million, solar electrification of the Cheddi Jagan International Airport at a cost of US$2 million, and the award of more than 4,650 Guyana Online Learning scholarships through Indian universities.

In recent years, India has built the US$27 million Providence Cricket Stadium, a US$2 million Centre for Information Technology Excellence, a traffic light system, and US$5 million worth of drainage pumps.

India and Guyana are member states of the United Nations and the Commonwealth.