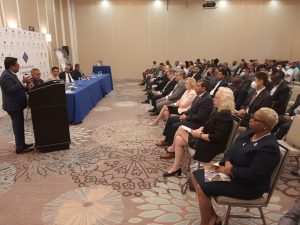 Finance Minister Dr. Ashni Singh on Thursday announced that Guyana was preparing to export manganese for the first time in 54 years.

Addressing the formal opening of the Private Sector Commission’s Annual General Meeting, he said ships were moored in the North-West District and loading the mineral for export. “Guyana, I believe, this very week will resume exports of manganese for the first time in 54 years. Right now, as we speak, vessels are being loaded in the northwest of Guyana with Guyana’s first shipment if manganese fir the first time in 54 years,” he said.

The mineral is being produced by Guyana Manganese Inc; a subsidiary of Chinese-owned bauxite BOSAI, Minerals, a bauxite producer in Linden.

Back in 2016, the Canadian Reunion Gold Corporation had sold its Matthews Ridge manganese project for US$10 million to BOSAI Minerals.

Manganese is used in the manufacturing of types of steel, dry cell batteries and some paints.

Guyana had once exported manganese between 1960 and 1968 through a company, Union Carbide, a subsidiary of the United States-headquartered Dow Chemical Company.