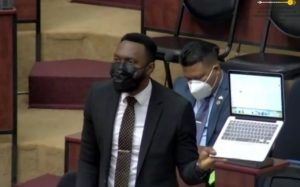 Opposition Chief Whip Christopher Jones holding up a laptop to show the House Speaker Manzoor Nadir that the motion was sent on the correct letter head. (File picture)

“We also note your decision to suspend Member of Parliament Sherod Duncan but find it interesting that the same level of sanction has not been applied to the Minister Nigel Dharamlall who is on public record as uttering while on the floor, one of the  vilest comments that could be directed to any female member of Parliament anywhere in the world. This we find totally unacceptable and expect that the same level of censorship will be applied to the offending Minister,” Mr. Jones told the Speaker in a letter dated February 10, 2022.

Mr. Jones also informed the Speaker that Mr. Duncan was not properly suspended for the next four sittings because the House was still in Committee of Supply for the consideration of the 2022 National Budget estimates rather than a regular sitting.

“Of most concern is the misapplication of the standing orders in relation to the suspension of Member of Parliament Sherod Duncan.  You may recall on review and there is enough video footage to support this, that the suspension was done while in the Committee of Supply instead of the larger National Assembly,” he said. Mr. Jones recommended that the “error” be corrected in order to comply with the Standing Orders of Parliament.

The Opposition Chief brought to the House Speaker “issues of grave concern” stemming from Mr. Dharamlall’s “dildo” remark. The Minister Wednesday night publicly apologised inside and outside the House to those who felt offended. “I’d like to indicate to you that if I had said anything that was misconstrued, that it was not my intention to make those statements to that effect and if there were statements that were unparliamentary on my part  during the course of the interrogations, then I would like to withdraw them as well,” the Minister  told  the House.  The Minister said he was moved to provocation by the persistent verbal attacks by several APNU+AFC parliamentarians.

The Opposition Chief Whip urged the House Speaker to review its position on those two issues “as we understand the difficulty of managing the situation at the time and that you make not have been in possession of all the facts.”

Mr. Jones stated that the dispensation and perception of fairness in the discussions of the House must be upheld at all times for Guyanese to see.

The opposition has been accusing the House Speaker of bias in favour of the government, but he has vehemently denied such allegations.