‘PNCR must take its position on Opposition Leader, Representative of the List to APNU’- Harmon 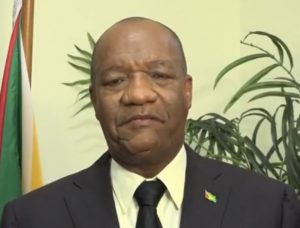 Opposition Leader Joseph Harmon on Friday afternoon strongly indicated that if the People’s National Congress Reform (PNCR) wants its leader, Aubrey Norton, to replace him and also become the Representative of the List of Candidates, that party would have to take its concerns to A Partnership for National Unity (APNU).

While in APNU, the Working People’s Alliance had often complained that that grouping had hardly ever met to craft political and government policies.

Currently, former PNCR Leader and APNU+AFC presidential candidate, David Granger is the Representative of the List of candidates and so he has the power to recall or replace any of that coalition’s 31 parliamentarians. APNU’s Chairman is Mr. Granger and its General Secretary is Mr. Harmon.

In reacting to Mr. Norton’s disclosure earlier Friday that the PNCR’s Central Executive Committee has decided that he should be the Opposition Leader, Mr. Harmon stopped short of explicitly reiterating that the two are separate positions. “The Office of the Leader of the Opposition is a constitutional office and is consequently governed by the constitution,” Mr. Harmon said.

The PNCR leader brushed aside a question earlier Friday on whether he was convinced that legally the Representative of the List could be changed.

At least nine APNU parliamentarians, who are PNCR members, are solidly behind Mr. Harmon were the matter to ever be put to a vote again in the National Assembly.

The PNCR is the largest and most influential party in APNU, but since the March 2, 2020 general and regional elections the Working People’s Alliance (WPA) and Justice For All Party have walked away leaving the little-known National Front Alliance as well as the Tabitha Sarabo-Halley’s Guyana Nation Builder’s Movement and the Equal Rights and Justice Party of Jaipaul Sharma.

Ahead of the PNCR’s internal elections, the then Central Executive had accused Mr. Granger of running a one-man show by breaching a decision to bring the Guyana Nation Builder’s Movement and the Equal Rights and Justice Party into APNU without the approval of the largest party.