Leader of the Alliance For Change (AFC), Khemraj Ramjattan and then Minister of State, Joseph Harmon.

Leader of the Alliance For Khemraj Ramjattan on Friday slammed efforts by the People’s National Congress Reform (PNCR) to replace Joseph Harmon with Aubrey Norton as Opposition Leader, saying that he does not care if sticking with the rule of law results in a schism between the PNCR and AFC.

Mr. Norton’s disclosure earlier Friday that his party’s Central Executive Committee (CEC) has decided that he should become the new Opposition Leader but Mr.  Ramjattan said unless Mr. Harmon wants to resign or just cause is shown why he should be replaced by way of a constitutionally provided no-confidence motion, there is no good reason to call for his removal and he should remain as Opposition Leader for the next five years. “I don’t know of anything other than those two reasons why he should not be and my nine members of parliament have confidence in Harmon at this stage; he has done nothing that we shouldn’t have confidence in him,” Mr. Ramjattan, who is a well-recognised civil and criminal lawyer, told News-Talk Radio Guyana 103.1 FM/ Demerara Waves Online News.

Asked what would be the AFC’s position if a no-confidence motion is tabled against Mr. Harmon, Mr. Ramjattan said his party would vote after seeing reasons. “I have to see reasons why we do not have confidence in Joe. They would have to show me some good reasons. Right up to now, I see no reason for any no-confidence against Joe. What’s the reason for the no-confidence? Joe did something bad or something? Just like that you bring a no-confidence against Joe?,” he asked rhetorically. Mr. Ramjattan credited the Opposition Leader with being a skilled organiser, understanding Guyana’s electoral system and getting the support from the PNCR at that time when he was to be appointed for an expected five-year term or earlier when elections are called.  If a no-confidence motion is tabled, Mr. Ramjattan said that “from what I know a huge percentage” of the 22 parliamentarians drawn from the PNC support Mr. Harmon.

The AFC Leader said if the PNCR Leader wants Mr. Harmon to be removed from that constitutional office, he would have to “get the no-confidence motion going” or ask for his resignation. At the same he sought to temper Mr. Norton’s expectation. “When you become leader of the PNC you don’t automatically become entitled to Leader of the Opposition in the context of the sequence of events as happened here. When you win leadership of the PNC, win leadership of the PNC. That doesn’t entitle you to parliamentary status, that doesn’t entitle you to Leader of the Opposition status,” he said.

In addition to none of the APNU parliamentarians not having told him why Mr. Harmon should be removed, Mr. Ramjattan said the final decision rests with Representative of A Partnership for National Unity+Alliance For Change (APNU+AFC) List of Candidates, David Granger.  In his own instance, Mr. Ramjattan said if the AFC’s National Conference scheduled for March, 2022 votes him out of the leadership, it does not automatically mean that he would lose his parliamentary seat. “I don’t understand the logic of some of the social commentators and even some people inside of the PNC,” he said. 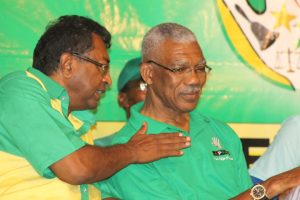 The AFC Leader said he would be conducting research of what obtains in other countries to ascertain whether the PNCR’s position is rational. Told that one of the arguments that has been surfacing is that the PNCR is the largest party in the main opposition, Mr. Ramjattan reasoned that that party’s parliamentarians that have been already extracted by the Representative of the List under Guyana’s constitutional parliamentary regime. “Are we now going to flout all of that?…. So simply because you have a change in party leadership, you drag all of them out and who the party want now you put in? That is how this democracy operates? The party PNC constitution overrides the constitution of the land,” he said.

Tangentially referring to the status of the Representative of the List of Candidates, Mr. Ramjattan said that person- in this case Granger- could not be fired and remains there for five years. But, he declined to say whether the AFC would support Mr. Granger being replaced. He called on the PNCR to grasp the fact that Guyana’s constitution governs how parliamentary representation works. “It is a different constitutional regime for parliamentarians as against leader of the PNC and what the PNC leader can do and they must understand and quickly understand that otherwise it will be an unnecessary implosion inside of the PNC if people don’t understand these regimes that govern these things,” he said. “If you have to know what the law is and if you want to live the rule of law life, you have to understand that. You don’t just say I win the leadership, get out of here,” he said.

The AFC Leader said when he meets with his PNCR counterpart, he would lay down his position based on Guyana’s constitution and his “political judgement call”.

The Opposition Leader on Friday afternoon strongly indicated that if the PNCR wants its leader to replace him and also become the Representative of the List of Candidates, that party would have to take its concerns to A Partnership for National Unity (APNU).

On Friday evening, APNU issued a statement saying its “members” are confused by statements which suggest any one party through its internal meeting can make adhoc changes to agreements which were reached and expected to last for the tenure of the 12th Parliament.

The members of the APNU would therefore expect that all members in keeping with the proper and ethical norms would bring their positions on matters before the APNU Executive for consensus and agreement rather than making public pronouncements on matters that cannot be decided upon by any one party,” the APNU members said. After the departure of the Working People’s Alliance and the Justice For All Party from APNU, that loosely-knit organisation’s members are now the PNCR, National Front Alliance, Guyana Action Party, Guyana Nation Builders Movement and the Equal Rights and Justice Party.

While in APNU, the Working People’s Alliance had often complained that that grouping had hardly ever met to craft political and government policies.

2022-01-08
Denis Chabrol
Previous: ‘PNCR must take its position on Opposition Leader, Representative of the List to APNU’- Harmon
Next: Commonwealth Secretary General in Guyana for talks; spotted at Bourda Market