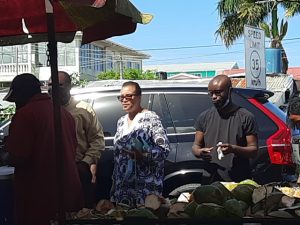 Commonwealth Secretary General Baronness Patricia Scotland is in Guyana and on Saturday said she intended to hold talks with officials on the sustainable development goals.

Speaking with Demerara Waves Online News just after shopping fruits and coconut water on at Bourda Market, North Road, she said, “I’m in Guyana to talk about regenerative development and to help the Guyanese government fulfill many of their aspiration in relation to the sustainable development goals.”

The Commonwealth Secretary General said she planned to “absolutely” meet with President Irfaan Ally and “certainly hope” to meet with the opposition.

The Commonwealth, a grouping of former British colonies, has always pointed to the need for electoral reform in its Observer mission reports. That grouping had been among several international organisatiins that had called for the results of the 2020 national vote Recount to be accepted.

The Commonwealth has consistently backed Guyana’s sovereignty as it relates to Venezuela’s claim to the Essequibo Region.