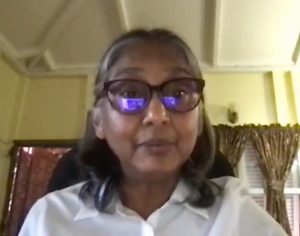 Environmental and human rights activist, Guyanese Janet Bulkan on Tuesday asked the Inter-American Commission on Human Rights (IACHR) to order the halt of oil and gas exploration because fossil fuels were damaging the environment and causing a loss of livelihoods.

“We respectfully ask you, Commissioners, to call upon Caribbean States to stop activities that aggravate the climate crisis such as any further risky fossil fuel exploration in deep water which threatens the effective enjoyment of human rights,” she said.

Ms. Bulkan feared that a massive oil spill could affect Caribbean islands, even as more oil exploration and production were continuing apace without consultations.

“The feverish race to explore for and pump more and more oil in deep waters is taking place with minimal oversight from Guyana’s regulatory agencies. This is very high risk for the environment and for resource-dependent human populations,” she said. Ms. Bulkan flayed Guyana and Suriname for jointly agreeing to tell the Global Climate Change conference in Glasgow, United Kingdom that they need to explore and produce more oil to address the climate crisis. “In my opinion, this is a vey high risk strategy. It imperils the the lives and livelihoods of all our Caribbean people,” she said.

She told the hemispheric body’s hearing on  the topic, “The Impact of Extractive Industries on Human Rights and Climate Change in the Caribbean” that since the first discovery in 2015 the recoverable barrels of oil equivalent has since increased to 10 billion barrels.

Ms. Bulkan said the expansion of the oil sector in Guyana was “worsening the climate emergency” and posing a severe threat to Caribbean islands due to their closeness to Guyana’s offshore oilfields compared to the coast of this South American nation. “The threat of oil spills is also an urgent issue for the people of the Eastern Caribbean islands who live in the direct path of any offshore oil spill,” he said.

In addition to rising sea levels and “record lows” reduced fish catches due to climate change, she told the IACHR hearing that the oil industry was in clear violation of Guyana’s constitution that guarantees the right to a healthy  environment and in breach of this country’s commitments.

The IACHR hearing, which was requested by Jamaican Human Rights lawyer Malene Alleyne and the founder of Freedom Imaginaries Esther Figueroa, also heard that Guyanese were being excluded from consultations and were not being provided with sufficient information, decision-making and access to remedy for environmental matters.

Trinidad and Tobago environmental activist Gary Aboud recommended to the IACHR that environmental laws governing Suriname, Guyana,  Trinidad and Tobago, Venezuela and Grenada should be harmonised because of the common conditions. “The legislation requires synchronisation…All of the region have commonalities of water and air so we need to have regulations that respect and coordinate those commonalities and that doesn’t exist,” he said.

Ms. Bulkan said wells are being drilled to a depth of  18,000 feet in hard rock, in addition to 5,000 feet of water to the seabed, but the oil spill response mechanism appeared to be insufficient. “Commissioners, this is very high risk, In other words, we did not hear last (Monday) night that there was any marshalling by ExxonMobil , no evidence of controlling or stopping a spill  in waters as deep as this is and I would like to suggest that this puts the entire Caribbean at risk,” she said.

The environmental and human rights activist believed there was no appetite to revise or enact a new Petroleum Act or establish a Petroleum Commission because all governments want to retain ministerial control. She said the need for environmental impact assessments on major projects has been waived, with the only recourse to a board hearing.

2021-10-26
Denis Chabrol
Previous: ExxonMobil optimistic no repeat of flash-gas compressor problems aboard new oil production vessel; output may peak in 2023
Next: Fangtooth is next drill prospect in the Stabroek Block