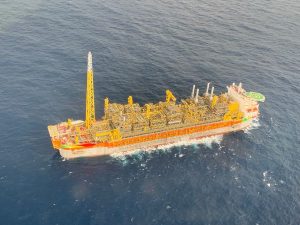 ExxonMobil is hopeful that the flash-gas compressor aboard the new oil production vessel, Liza Unity, would not be plagued by problems similar to those aboard the Liza Destiny that had affected production and incurred a hefty environmental fine, a company official said Tuesday.

“We recognise the challenges that we had with the Liza Destiny start-up and the flash-gas compressor. We are committed and working hard to be successful in the Unity start-up. The flash-gas compressor is a different design on Unity and we have confidence in this equipment that we are going to be able to bring it up and meet our expectations,” said ExxonMobil’s Production Manager, Mike Ryan.

Though the Floating Production, Storage and Offloading vessel, Liza Unity, could produce a maximum of 250,000 barrels of oil per day, he explained that the “real reason” to take in a lot of oil is to aid with the commissioning of the gas injection and compression systems first.

The ExxonMobil official said that crude oil production would be increased gradually to 220,000 barrels per day possibly into 2023 after the gas-handling systems have been optimised. “Once we get the gas-handling systems to the state we want, we can then start to begin increasing production but this production is going to come from a number of different subsea wells  and so you can’t  just turn on one switch and it all comes up- over 200,000 barrels per day. The ramp-up of productions is going to be through 2022 and potentially into 2023 as we learn more about this reservoir and do it safely,” he said.

Mr. Ryan highlighted that the production would be ramped up fully only after ExxonMobil gets the safety and environment systems right.

Shortly after ExxonMobil had begun commercial oil production in Guyana back in 2018, the Liza Destiny had registered several downtimes due to a faulty flash-gas compressor. Eventually, the compressor had been flown to Germany for advanced repairs.

The company, which is the major partner and operator in the Stabroek Block, had also been fined under a revised environmental permit for gas flaring due while the flash-gas compressor had been undergoing repairs.