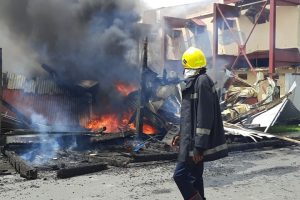 A firefighter walks past the crumbled remains of the ‘A’ Divisional Commander’s Office.

All detainees at the Brickdam Police Station lockups, firearms and ammunition were accounted for, but several vehicles and vital records were Saturday destroyed by fire that swept through virtually all of the colonial wooden buildings that made up Guyana’s major police divisional headquarters.

Aided by steady and brisk north-east wind, the blaze quickly engulfed the Brickdam Police Station’s main building that housed inquiries, prosecutors’ chambers, registry-including firearm licensing-, criminal investigations department, and the offices of the police commander and other senior officers.  Also flattened by the raging inferno were the traffic department and administrative building.

Home Affairs Minister Robeson Benn said evidence, including vehicles and other exhibits, were destroyed and efforts would have to be made to reconstruct important records. “Work will have to be done to reconstruct the documents”. Police Commissioner, Nigel Hoppie added that, “we will determine the way forward but our effirt would start immediately and we need to ensure that we bring all the documents that may be missing; a team would be put together to ensure that this is swiftly addressed.” 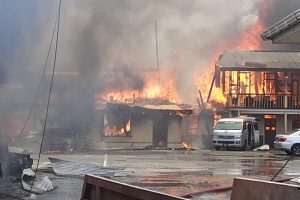 The Traffic Department at the Brickdam Police Station

Mr. Benn confirmed that all of the 16 detainees and the arms and ammunition were secured.

The derelict western  building that houses the barracks was saved by fire fighters as well as the fact that the main structure had crumbled and the flames and heat could not easily stretch across.

While fire fighters battled the blaze, policemen and women, including Police Commissioner Nigel Hoppie and several senior officers, were busy assisting in the movement of numerous records from offices before the fire eventually caught them. Also removed from the stores were several items including vehicle tyres, riot shields, holsters, magazines, a generator, document cabinets, bicycles and other valuables. 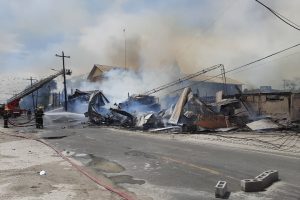 The remnants of the wooden building on Hadfield Street behind Brickdam Police Station.

Police Commissioner Hoppie said police have already put systems in place to ensure that there is “peace and order” is maintained. “We need to come again to ensure that we maintain our mandate of protection of the citizenry,” he told News-Talk Radio Guyana 103. 1 FM/Demerara Waves.

The Home Affairs Minister said  the relevant personnel have been already asked to consider designs for a new Brickdam Police Station.

The Police Force would soon announce where members of the public could go to lodge complaints.

The Home Affairs Minister could not immediately say whether he was satisfied with the performance of the firefighters’ response. Firefighters were seen for a very long time trying to get water into the hose in front of the Brickdam Police Station, and when the pressure became available they could not readily control the hose.

An fire tender with an aerial turntable ladder did not arrive until the already shut down Farley Gas Station on Hadfield Street was being threatened by the blaze.