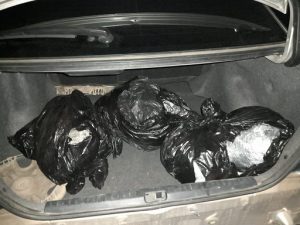 The parcels of what police say contained marijuana and found in the car trunk of Deputy Superintendent of Police Dexter Brown.

Junior members of the Guyana Police Force on Friday night chased a senior police officer, eventually intercepting the car that he was driving and allegedly finding a quantity of marijuana in the trunk, the law enforcement agency said.

The police force identified him as Deputy Superintendent Dexter Brown.

Investigators said he was at a roadblock at Helena No. 2 Public Road,  East Coast Demerara,  minutes after eluding a police patrol in the Regional Police Division 5 (Mahaica-West Berbice).

“While the vehicle was at the roadblock, the police patrol from the Regional Police Division 5 drove up, resulting in DSP Dexter Brown driving through the roadblock in an attempt to escape. He was however pursued by the ranks and was intercepted at Lima Dam, Mahaica, East Coast Demerara,” police said.

The Guyana Police Force said the vehicle, driven by Mr. Brown was searched and 9.4 kilograms of cannabis sativa and 2 rounds 9mm ammunition were allegedly found.

Deputy Superintendent Brown has been arrested and the vehicle is in police custody as the investigations continue.

Recently, a woman who was arrested at a road block at Fort Wellington, West Coast Berbice allegedly with a quantity of marijuana had told police that a policewoman based at the New Amsterdam Central Police Station and a civilian had  given her the parcel to carry.

However, a senior Region 6 (East Berbice-Corentyne) police officer had said that no policewoman fitting that description was working at the Central Police Station in New Amsterdam.