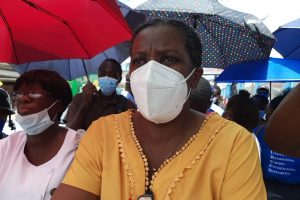 GPSU Vice President Dawn Gardner speaking with reporters in the presence of a number of GPHC staff outside the hospital.

The Guyana Public Service Union (GPSU) will this week file court action against the locking out of nurses and other government employees because they are not vaccinated or refuse to take a PCR test, a top union official said Monday.

GPSU Vice President Dawn Gardner made the announcement during an interview with the media in the presence of about 30 nurses and other workers on the New Market Street pavement just outside the Georgetown Public Hospital Corporation (GPHC).

She said the legal action would challenge the alleged breach of “the various laws, the necessary laws” that protect the workers instead of  being subjected to “bullyism tactics”. “There is no law that says that this vaccine is mandatory,” said Ms. Gardner. “You are forcing people now to take what now and there is no law  saying you have to get it,” she added.

Asked to defend the GPSU’s stance that no one should be forced to take the vaccine in light of the Occupational Safety and Health Act that requires employers to ensure the working environment is safe, Ms. Gardner cited the need for employers and unions to meet. “The law also states that the employer is responsible for consulting with the workers’ representative so we have to take both into consideration… and we come up with a common position and move forward,” said the GPSU’s Vice President.

Ms. Gardner could not immediately say how many  GPHC workers are unvaccinated or have not taken a PCR test

Highlighting that a PCR test costs GY$25,000, the GPSU official reiterated her call for government to take the tests free rather than requiring workers to do so at private laboratories at their own expense. 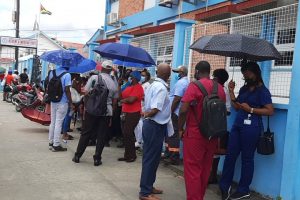 A number of GPHC workers, outside their healthcare institution.

She claimed that despite the lock-out of workers, a number of unvaccinated nurses were being allowed into the hospital to perform duties by “picking and choosing” and not allowing others in.  No figures were immediately available, but she said they would be tendered as evidence in court. “I don’t want to disclose the numbers now. This is information that we will hold until we get to the court,” Ms. Gardner added.

The GPSU Vice President accused the Health Minister of misleading the public by stating that the lockout of unvaccinated workers did not affect the GPHC’s workers, although they are in the majority.