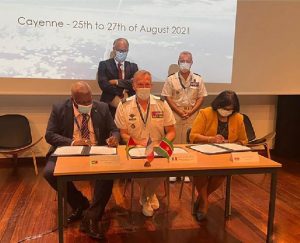 Guyana, France and Suriname have agreed to improve cross-border security and combat climate change, but so far the Guyana government has been mum on the accord.

Guyana’s Prime Minister Mark Phillips attended the Strategic Dialogue in Cayenne, French Guiana from August 25 to 27, 2021, and signed the cooperation agreement. French Guiana is an overseas Department of France.

However, the Guyana government has said nothing about this agreement and the Prime Minister has declined several requests by Demerara Waves Online News/ News-Talk Radio Guyana 103.1 FM on how Guyana would benefit from the agreement.  Foreign Affairs Minister, Hugh Todd also did not respond to similar questions.

Starnieuws reports that “one of the agreements is to increase joint patrols on land, river and sea. The purpose of the exchange of information is to enable the countries to act in a timely manner against various threats. ”

“All three countries presented their challenges and there was talk about how we will formulate our strategies in such a way as to optimally protect our territory, our natural resources, but above all our people,” said Suriname’s Minister Krishna Mathoera.

She said that France, Guyana and Suriname live in a world that is very unpredictable and where we are very connected, “It is therefore important that we use our resources very effectively and efficiently towards the common strategic interests,’ she also said.