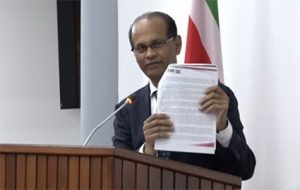 NDP faction leader Rabin Parmessar shows the joint statement of the presidents of Suriname and Guyana, which includes reference to the fishing licenses. (Starnieuws picture)

Suriname has agreed to licence Guyanese fishermen to operate in Surinamese waters, but an opposition party there has registered its objection.

President Irfaan Ali, at a joint news conference on Thursday with his Surinamese counterpart, announced that from January 2022, Guyanese fishers would be granted  licences “because this is the period when the licences are normally granted.”

In a joint communique at the end of two days of intense discussions by both sides, Dr. Ali and Suriname’s President Chandrikapersad Santokhi said that they “discussed the issuance if SK fishing licences to Guyanese fisherfolk and agreed that both ministers responsible would work towards the issuance if fishing licences in that category by January 1, 2022.”

Presidents Ali and Santokhi noted in their communique that the licences would take into account “the established quota on the Surinamese side.”

But Starnieuws reports that leader of the opposition National Democratic Party (NDP), Rabin Parmessar strenuously objected to the plan to licence Guyanese fisherfolk because it is not in the interest of  Suriname. “It is sad and a stab at our fishermen and fishing grounds. I call on our fishermen and all Surinamese to protest strongly against this,” says Parmessar.

Mr. Parmessar said he had already warned about this a few days earlier and queried  whether Guyana would leave the New River area which is the subject of a border dispute between the two former European colonies.  He wondered “if Guyana is going to evict Tigri, because we have a problem with that”.