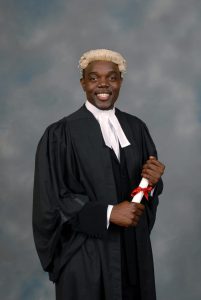 Several of 30 firefighters on Friday set the stage for High Court action to challenge a decision by the Ministry of Home Affairs to block their promotions.

Attorney-at-Law Eusi Anderson- representing Shekel Rogers, Kathyann Belille,  Tiffany Sancho, Marlon Philadelphia, Akaney Hinckson, Winston Manjet, Candesa Cox, Lois Cordis, Shenne Subrattie, Simone Hollingsworth and Neville Cumberbatch- said they could be not be removed from the promotion list without a hearing and those who had committed departmental infractions had already been punished.

“None of my clients can be removed from any list without a hearing, without due process and without natural justice being strictly adhered to. Unlike their colleagues who you retained on the promotion list notwithstanding their disciplinary infractions, they have done an alleged crime and are paying for it twice. This is patently illegal and cannot withstand even the slightest judicial scrutiny,”  Mr. Anderson told Fire Chief Kalamadeen Edo.

He gave Mr. Edo until 4:30 PM August 23, 2021 to issue the list of persons listed as passing the Guyana Fire Service promotion examinations as of 29th January, 2021. The Attorney-at-Law said the 30 names that Edo “arbitrarily, capriciously and unlawfully removed must appear on the new list to Home Affairs Minister Robeson Benn together with all the other successful members of the Guyana Fire Service. In the letter copied to Mr. Benn and President Irfaan Ali, Mr. Anderson warned the Fire Chief that he does not comply, a constitutional action being brought against him personally for discrimination and eventually remove him from office. “If successful each of my clients will be entitled to receive millions of dollars in compensation from you,” he said.

In correspondence dated July 29, 2021 and seen by News-Talk Radio Guyana 103.1 FM, Principal Personnel Officer of the Ministry of Home Affairs, for the Permanent Secretary Mae Thomas, referred to a letter dated July 21, 2021 on the subject ‘Disciplinary Infractions Against Persons Eligible for Promotions” and advised that a decision has been taken to have the promotions list revised omitting” 30 named persons.

Those on the list include fire fighters who have been serving for more than 20 years.

In dealing with the status of each of his clients, Mr. Anderson said two of them never had any disciplinary action taken against them; one had four charges and was warned, and  another was found guilty for improper conduct in 2017 and her salary was deducted n 2018 and promoted in 2019. Another fireman was charged with disobeying lawful order and his salary was deducted; two others faced four charges each and were warned, and another two fire fighters were arbitrarily removed without reason or cause. Yet another fireman said he does not have any pending infraction, his salary was deducted for disrespectful words in 2019 and even after that infraction was promoted in February, 2021.

The Attorney-at-Law indicated that his clients were discriminated against because there are others who are on the promotions list that have also committed departmental offences. “In the event that record-keeping proves challenging, I draw your attention to persons who you retained on the impugned list despite pending and resolved disciplinary infractions against them,” the lawyer said.

According to the sources, issues had later been raised about the qualifications of the personnel and when that failed, questions surfaced about disciplinary matters. The sources said the entire affair smacked of a breach of procedure because the fire fighters who would not be promoted ought to be advised in writing about thee decision, reason and the time-frame within which they would be reconsidered. But, according to the source, that was not done and a secret plan that had been hatched to deprive the fire fighters, who had been successful at the exam, was busted by someone who had recognised the injustice. “The information leaked that this is what is going to happen. if this info was not leaked promotion day would have come  and they would have asked ‘what happened to me?’

The fire fighters have to be promoted because, according to the sources, vacancies have to be filled at new fire stations at Lethem, Mahdia, Mabaruma, Melanie Damishana,  and the fireboat service