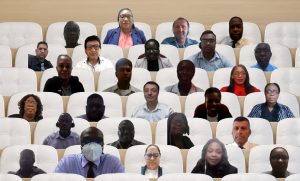 The Guyana Police Force’s Special Organised Crime Unit (SOCU) has been increasing its staff and working closely with the Director of Public Prosecutions (DPP) to go after financial crimes, Attorney General Anil Nandlall announced on Thursday.

“The Special Organised Crime Unit (SOCU) has recruited additional staff in the areas of law, forensic audit, accounting and investigations. Inter-agency cooperation between SOCU and the Office of the Director of Public
Prosecutions (DPP) will also be improved, leading to an increase in the conclusion of money laundering related cases,” the Attorney General’s Chambers quoted him as saying.

This announcement was made at the opening of Guyana’s National Risk Assessment Review Workshop to complete its second Anti-money Laundering and Combatting the Financing of Terrorism and Proliferation Financing.

He says Inter-agency cooperation between SOCU and the Office of the Director of Public Prosecutions (DPP) will also be improved, leading to an increase in the conclusion of money laundering related cases.

The Attorney General also says that the Guyana government has boosted the prosecutorial capacity, with a view to improving the effectiveness of investigations, prosecutions and convictions.

He says a number of shortcomings in the Anti-Money Laundering and Countering of Financing Terrorism Act as well as related legislation will be changed in keeping with recommendations by the National Risk Assessment.

Mr. Nandlall says the assessment is also focusing on the  Oil and Gas sector because Guyana has become an oil producing nation.

In this regard, he says it is critical to ensure that the Anti-Money Laundering and Countering of Financing Terrorism apparatus is adequate to address the risks and threats that Guyana may face.

He thanked the members of the National Working Group, and expressed Government’s commitment to the prevention of the abuse of Guyana’s financial system from the illicit gains and motives of criminals.

World Bank representative, Mr. Klaudijo Stroligo, congratulated Guyana for the methods employed during the NRA, given the challenges faced globally by the COVID- 19 pandemic. He also expressed gratitude to the European Union for their financial contribution in funding the World Bank’s participation in the NRA process.

Day one of the Workshop consisted of presentations on the money laundering threats faced by Guyana, also encompassing assessments of the oil and gas sector, illegal wildlife trade, terrorism financing (TF) and proliferation financing risks. There was also an assessment of the overall national vulnerability of Guyana in relation to money laundering/ terrorist financing  risks.

Day  one concluded with presentations by the Banking and Insurance Sector, as well as a presentation relating to other non-bank Financial Institutions.

Presenters included staff members of authorities such as the Bank of Guyana, the  Financial Intelligence Unit, the Ministry of Natural Resources, the Office of the Director of Public Prosecutions and the Attorney General’s Chambers.