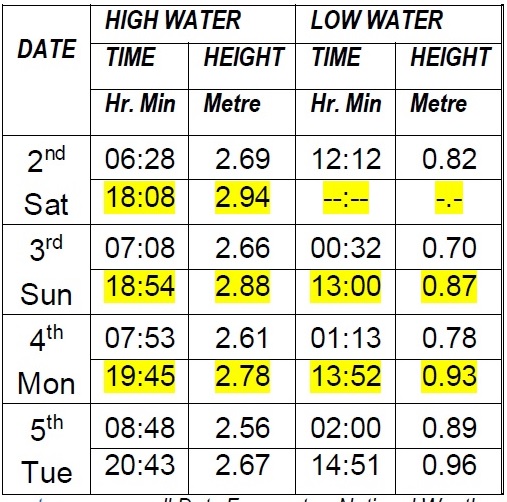 Guyana’s weather forecasters are warning coastal and riverine residents that they could experience flooding and wind damage to structures due to unstable weather conditions.

The Hydrometeorological Department of Guyana’s Ministry of Agriculture on Friday night warned that  the highest waves, in excess of 3.5 metres (9 feet – 11 feet), are expected beginning Friday night through Sunday afternoon.

This is due to windy conditions of 8 meters per second to 12  meters per second in the Atlantic Ocean adjacent to Guyana’s.
coast, the forecasters stated. Saying that those windy conditions were expected to continue through Monday 4 January, 2021, the Hydromet Service warned that the heavy winds and high tides could badly affect the coast. “This combination of above normal high tides and very high waves may cause over-topping and/or damage to the river and sea defense system in some areas. High winds may also prove dangerous to some coastal structures and operations,’ the forecasters said.

A number of Caribbean islands have issued similar warnings for the coming days.

The local Hydromet Service said that from 7 PM Friday to 7 AM Saturday, Regions 1 to 8 and 10 are forecast to  have mostly cloudy skies. A
few light showers may be observed over regions 1-8 & 10 during the  early evening hours. Skies are expected to become occasionally
overcast over these regions during the early morning period. These conditions may be accompanied by frequent showers and continuous
rain. All other regions can expect fair conditions throughout the period of the forecast. 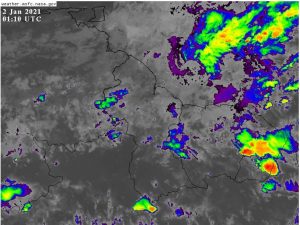 Winds are expected from different directions at 2 to 4 metres per second. Rainfall is expected between 15.0 mm to 30.0 mm

From 7 AM to 7  PM Saturday, mostly cloudy skies can be expected throughout Guyana. These conditions may be accompanied by frequent
showers and continuous rain during the mid-morning to afternoon period over regions 2-6, 8 & 10. All other areas can expect fair conditions throughout the period of the forecast.

Winds are expected to be North-Easterly to Easterly between 4 to 6 metres per second. Rainfall is expected between 20.0 mm to 40.0 mm