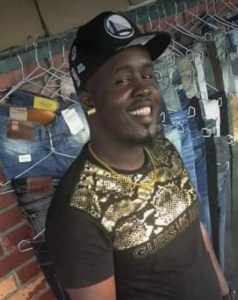 He has been identified as 32-year old Paul Anthony “Blacka” Smith who lived at 31 Bent Street, Werk-en-Rust. He bore one gun shot wound to the upper back, police said.

The Guyana Police Force said Smith was shot at about 6:30 PM by another vendor, and stopped short of saying that he was involved in a disagreement with someone else.

“Enquiries disclosed that the victim was observed holding a cutlass and heading to his car when he was shot by another male, who is also a clothes vendor at Longden and Commerce Street and of East La Penitence Georgetown, after which he fell on the front passenger seat of his car,” the Guyana Police Force said.

Police said the 29-year old prime suspect has since been arrested.

Smith was subsequently picked up by public spirited citizens and taken to the Georgetown Public Hospital where he was seen and examined by a doctor on duty who pronounced him dead.