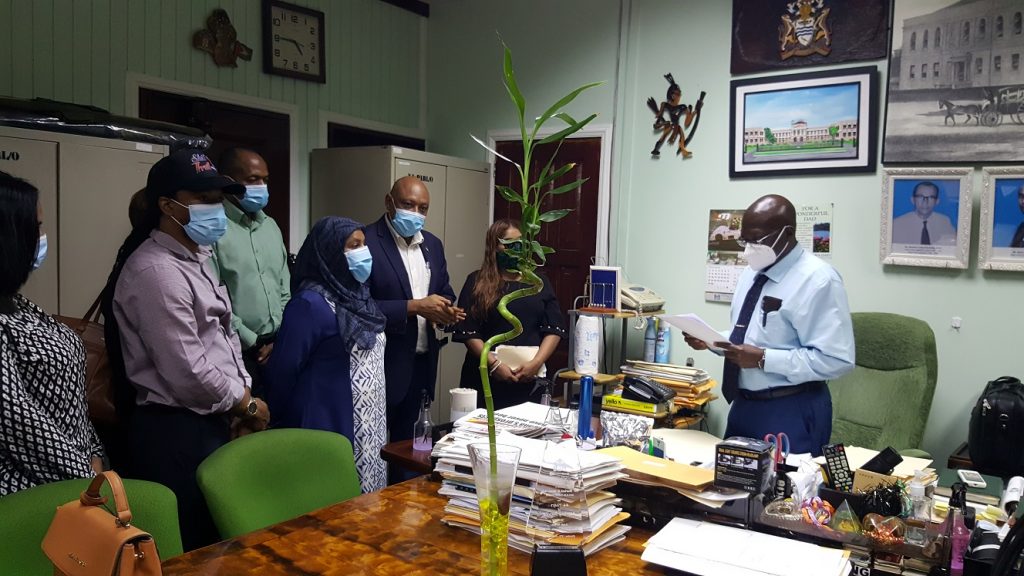 Clerk of the National Assembly, Sherlock Isaacs examining a copy of the motion that he received from an APNU+AFC delegation.

Guyana’s opposition A Partnership for National Unity+Alliance For Change (APNU+AFC) on Monday presented a motion to the National Assembly, calling on police to fast-track its probe into the early September “hate” killing of three youths in West Coast Berbice.

“We are here in our representative capacity to symbolically present a motion to the Parliament of which we are a part to call on the police force to expedite its investigations of the murder of the Henry cousins and Haresh Singh,” AFC Chairman, Raphael Trotman told reporters at Parliament Building.

After leaving their homes at about 5:30 AM on September 5, 2020 to pick coconuts to sell, their bodies were discovered at about 3:30 PM on September 6, 2020 about 300 feet apart on a coconut farm at Cotton Tree Village, West Coast Berbice. Amid intense unrest, Haresh Singh was killed and his motorcycle burnt as he had been heading to his farm on September 9.

The Guyana Police Force recently said several persons were arrested after investigators had been given leads in response to a GYD$3 million reward for information leading to the arrest and prosecution of anyone connected to the killings. Parents, who were at Parliament Building, to witness the delivery of the motio to the Clerk of the National Assembly, Sherlock Isaacs, said they have not been hearing any significant updates from police. “I need justice for my son and the time is too long. It taking too long. I need them to speed it up and let me get justice for my son because he is just sixteen (years) and his cousin was just eighteen and it is not easy to lose a sixteen year old,”  said Patricia Henry, Isaiah’s mother.

Mr. Trotman said based on the mutilated condition of the bodies of Joel and Isaiah Henry, it was clear that they were “hate” crimes. Calling the police “egregiously incompetent”, he said while government appeared unwilling to support the arrival of an Argentine team of forensic pathologists but have not done anything to bring others from the United States’ Federal Bureau of Investigation , Britain’s Scotland Yard or top Canadian investigators. “These crimes are undoubtedly hate crimes. I’ll stop sort of saying whether hate because of politics or hate because of race of even gender but I believe that anyone who saw those bodies, either physically or through photography would agree that whoever did this was full of hate and so the longer its takes for these crimes to be solved, the greater the inferences that the public will draw, the more pain the families will feel,” said Trotman, a former House Speaker.

The Caribbean Regional Security System (RSS) investigative team had collected samples and taken them to a St. Lucia laboratory for DNA testing but none of them had matched samples taken from the suspects. The Guyana government and the Police Force have refused to say why the trousers in which the body of one of the Henrys was found had not been sent for DNA testing.

The AFC Chairman said the coalition would be tabling similar motions at town and regional councils across Guyana. “We will not allow this matter to die and we will be filing several motions,” he said.