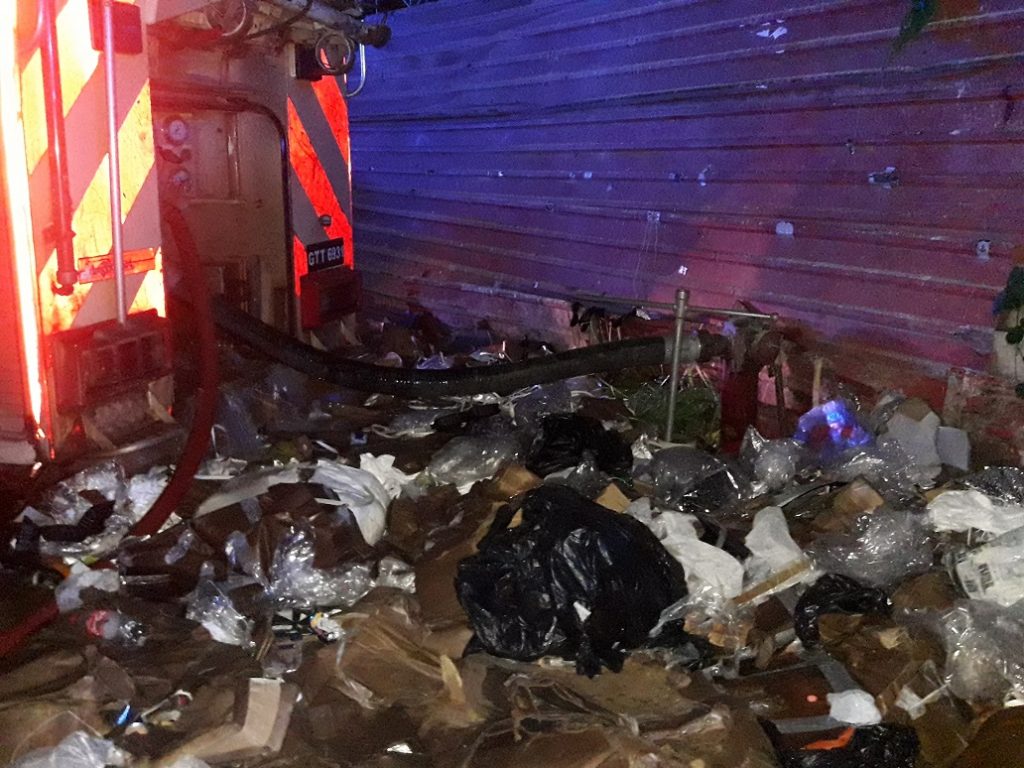 Firefighters suffered a slight setback in battling a blaze in commercial Georgetown Sunday night because one of the nearby fire hydrants was hidden under a thick pile of refuse.

A building that once housed Singh’s Nut Centre was destroyed by fire and the other that housed Dhoray’s Fashion, Price Rite and Harveys was saved by firefighters.

An associate of one of the businessowners says they told firemen where to locate one of the hydrants opposite the fire scene on Regent Street between Camp and Wellington Streets.

Fire Chief Marlon Gentle confirms that finding one of the hydrants was a problem. “We had some difficulties, we located one hydrant and the other hydrant- we had to do some debris clearing,” he said. Mr. Gentle said Sunday night’s experience of encountering obstructed hydrants is nothing new and something should be done to stamp out this practice. “That is a situation that we have encountered more than once; not only garbage but also construction material, even old derelict cars and so we find that they are blocking hydrants,” he said.

Home Affairs Minister, Robeson Benn, who was at the fire scene, also expressed concern about the rubbish-covered fire hydrant. “If that’s the case, it’s something we’ll have to examine and ensure that the hydrants are free,” he said. At the same time, he praised the Guyana Water Inc. for providing high water pressure to help fight the blaze that began at about 8:30 Sunday night. “I am pleased to see the hydrant here working under good pressure from the Guyana Water Inc. but as to the location and whether there is good access to it, we’ll have to look into that problem,” he said.

Firefighters were unable to save the Singh’s Nut Centre building but prevented the blaze from engulfing the building housing Dhoray’s , Price Rite and Harvey’s, and even possibly spreading to the Guyana Oil Company (GuyOil) filling station.