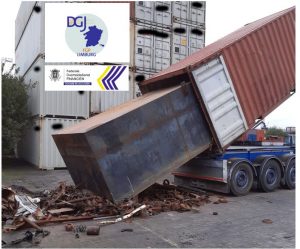 The false inside of a shipping container that contained 11.5 tons of cocaine that Belgian authorities said came from Guyana.

The High Court on Tuesday granted permission for two customs officers to remain in custody beyond 72 hours, even as the Guyana Revenue Authority (GRA) remained optimistic that it would recover a deleted image of shipping container believed to have been laden with 11.5 tons of cocaine.

He said a Chinese operator was working along with staff of the GRA’s Drug Enforcement Unit (DEU).

The cocaine was busted by Belgian authorities when the container arrived there supposedly with scrap metal only. Four other containers were shipped by Marlon Primo, but the image for the container suspected to have had the cocaine has been deleted from the system.

Based on pictures released by Belgium’s Federal Police, a steel metal case was made to fit inside the shipping container.

That steel case contained mostly cocaine with the scrap metal.

The Belgian authorities have arrested several persons in connection with the bust that was made last week at Antwerp.

The United States Drug Enforcement Administration is said to be assisting in the trans-Atlantic probe.