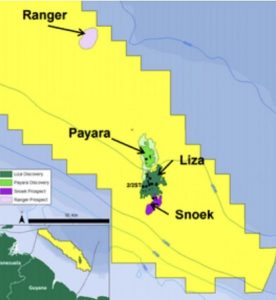 Guyana is on the verge of signing an agreement with ExxonMobil for its Payara Development Plan that would provide for hefty fines for flaring and the dumping of untreated water back into the sea, Minister of Natural Resources Vickram Bharrat said Friday.

He told News-Talk Radio Guyana 103.1 FM/Demerara Waves Online News that the actual fines were still under discussion and would be ironed out before the draft agreement is approved by Cabinet and make way for its signing.

“We have managed to negotiate on a number of environmental issues…..flaring will carry a fine. Water will have to be treated to international standard before dumping. I think we have a better agreement than Liza,” he said.

Mr Bharrat said representatives of ExxonMobil and the Guyana government could very well sign the agreement before the end of September, a move that would make way for the consortium, Esso Exploration and Production Guyana Limited, to make its final investment decision (FID).

Mr Bharrat also said experts were still quantifying the amount and value of oil and gas contained in the Payara well.

The Natural Resources Minister credited Vice President Bharrat Jagdeo with pushing for no flaring and for the treatment of water being used in the production of oil and gas, acknowledging that no such provisions had been included in the review by the United Kingdom-headquartered oil and gas consultancy, Bayphase Limited.

On the issue of delineating an overlap between the Payara and Liza wells, the Natural Resources Minister said that would be addressed under Section 44 of the Petroleum Act that provides for the securing of more effective recovery of petroleum from the specified reservoir.

On the issue of flaring, he said the floating production storage and offloading (FPSO) vessel, Liza Unity, being constructed for the Payara well, would be modified to prevent issues encountered with Liza Destiny. The President of ExxonMobil Guyana, Alistair Routledge earlier this month said he hoped that the issue of flaring at Liza Unity would be resolved by the end of this month.

Mr Routledge is already on record as defending the safety of discharging treated water into Guyana’s Exclusive Economic Zone where several deepwater exploration and production wells are being drilled.

In the context of reported preferences for the production water from the Payara well to be re-injected into the reservoir, Mr Routledge warned that doing so could possibly cause some problems. “There are some potential risks to doing that. There are some chemistry issues between the produced water and the reservoir fluids into where we would inject which can cause problems, potentially raising fractures in that part of the reservoir,” the ExxonMobil official has said. Noting that these are “quite complex balancing acts,” he has said treatment of water for re-injection could cause more air-emissions from the treatment facilities.

ExxonMobil has publicly cautioned that it could shift its investment resources to other projects instead of waiting for much longer on Payara. This latest Payara review is being conducted by a team led by Canadian Queen’s Counsel, Alison Redford who was picked by the Canadian government at the Guyana government’s request. The Guyana government, in the face of criticisms about Ms Redford, has sought to shore up her credibility by highlighting her work in the area of energy regulatory reforms in several countries and organisations such as Canada, Pakistan and the World Bank.

Previous: Venezuelan armed gang opens fire on Guyanese police, soldiers
Next: Start of govt, opposition inclusive governance talks in limbo “no honest interlocutor”- Jagdeo ; “that is none of his business”- Harmon