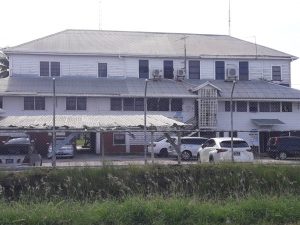 The headquarters of the Guyana Police Force’s Criminal Investigations Department.

Region Four Returning Officer, Clairmont Mingo has been charged and he remains in police custody, his lawyer said Saturday.

Acting Chief Justice Rishi Persaud on Friday ordered that after the expiration of his extended 24 hour detention on Saturday at 2:20 PM, he must report to police everyday from 9 AM. Mr. Mingo was also required to lodge his passport.

The 72 hours expired on Friday and the Police Commissioner secured a High Court extension up to 2:20 PM Saturday.

Mr. Mingo’s Attorney-at-Law said he was informed that his client was charged in connection with electoral fraud. No details of the charges were provided.

The lawyer was Saturday afternoon preparing papers to ask the High Court to release his client.

Well-placed sources said Mr. Mingo has been slapped with  at least four charges. He was arrested on Tuesday at his Mahaicony home as part of a police probe into alleged electoral fraud concerning the March 2, 2020 general and regional elections.

Mr. Mingo is due to appear in court on Monday.