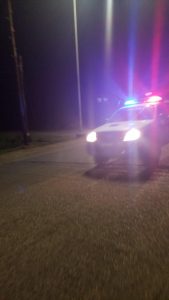 Region Five (Mahaica-West Berbice) Divisional Commander, Edmond Cooper said he personally was on the ground with other members of the force interacting with residents and building positive relations with the community. “I am a very professional police officer and I need to control what is happening in my area of responsibility,” he told News-Talk Radio 103.1 /Demerara Waves.

Mr. Cooper said Saturday’s exercise was aimed at preventing a repeat of unrests earlier this week when Region Four Returning Officer, Clairmont Mingo was arrested by police for assistance in complaints of electoral fraud.

Residents burnt tires on the roadway in reaction to Mr. Mingo’s arrest and, according to Mr. Cooper, with  the suspect still in custody, the law enforcement agency opted to embark on preventative policing. “What was happening was that there was a preventative posture and at the same time building a relationship with members of the public based on our past experience,” the Divisional Police Commander said.

The Police Officer vehemently denied claims by Mr. Harmon that heavily armed police clad in full riot gear had taken up positions at virtually every corner of the village and residents are frightened and fearful by their alarming and sudden presence.

But Mr. Cooper added that at least five members of the police force hail from Belladrum and everyone was interacting. “We are just gaffing with the people. Based on the situation, we don’t  want anything to blow out of proportion,” he said, adding that relatives of Mr. Mingo were also part of the exercise.

Earlier this year, political unrest following the March 2, 2020 general elections had resulted in the chopping and assault of several policemen and the stoning of a school bus that left several children traumatised.

Mr. Cooper said there was no unrest or threats on Saturday.

The APNU+AFC also demanded the immediate release of Mr. Mingo from police custody.  He has since been charged with several offences and he remains in custody  until  court on Monday. “The civil liberties and the constitutional rights of citizens are being trampled and abused by the Guyana Police Force which has clearly reverted to being a political tool of persecution for the fraudulent and illegitimate PPP regime, the likes of which was the case prior to 2015,” Harmon added.