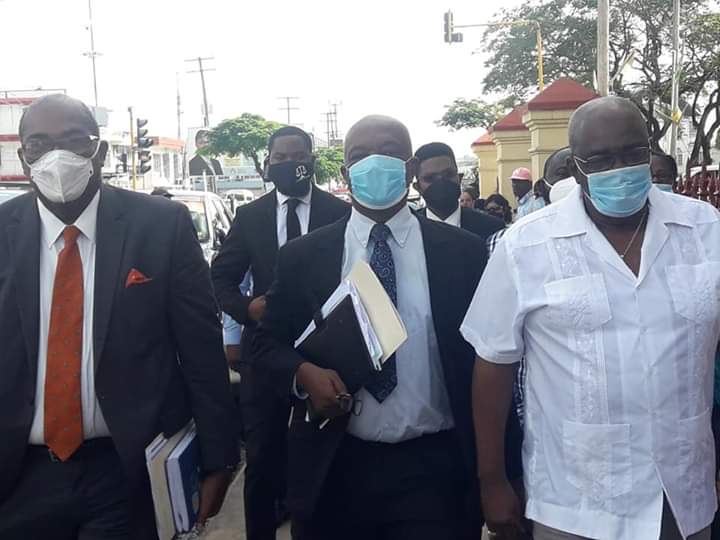 Mr. Lowenfield was charged with misconduct in public office, alleged electoral fraud, and conspiracy to alter results that had been declared in the March 2020 elections. He is  on GYD$450,000 bail on the three indictable offences. He is scheduled to return to court next week.

Mr. Lowenfield’s attorney told News Talk Radio 103.1FM/ Demerara Waves Online on Monday that the decision to write the DPP to drop those charges, comes from the recent move to drop all criminal charges against Chairman of the Guyana Elections Commission Retired Justice Claudette Singh.

“We have certainly invited the DPP to take similar steps, in a process to have undergone,” Mr. Hughes said, explaining that the missive in this regard was sent out sometime last week.

Three citizens namely Lorraine Joseph, Onita Walcott and Keith Ondaan on July 29, 2020 had filed three separate private criminal charges against the GECOM chair, alleging that she “acted recklessly and unlawfully” and “breached a court order” in relation to the March elections and the national recount.

Mr. Hughes said the DPP was asked to review the statements made in the charges against his client, arguing that the prosecution must be satisfied there is enough evidence to provide a “realistic prospect of conviction” against the defendant, something he argued is not there.

“We believe that the prosecution must find the statements to satisfy the minimum requirements or threshold to amount to criminal charges,” he asserted.

Although the attorney is yet to receive a response from DPP, he said that he is hopeful that due consideration will be given to the request and that on completion of the review of the statements in the case against Mr. Lowenfield, that all charges will be dropped as was done for the GECOM chair.

During the first court hearing, Attorney-at-Law Mr. Glenn Hanoman, who is prosecuting on behalf of the complainants, Desmond Morean of the People’s Progressive Party (PPP) and Daniel Josh Kanhai of The New Movement (TNM), was asked by Magistrate Faith Mc Gusty to obtain and submit copies of witness statements. Mr. Hanoman had argued then that the cases were very serious and almost treason. He said eventually the matters would be taken over by the DPP.

Mr. Hughes had flayed Mr. Hanoman for filing the charges without evidence after he (Mr. Hanoman) asked for a date in September for report and provision of witness Statements to the Defence.“He is not ready and the court is being used as an instrument for some other purpose other than law,” Mr. Hughes had said.

On Saturday, Attorney General Mr. Anil Nandlall told News talk Radio 103.1 FM/Demerara Waves Online that a criminal probe into the administrative operations of the GECOM concerning the 2020 general elections is on the cards, but said other options might include a commission of inquiry or a forensic audit.

If the DPP does not drop the charges against Mr. Lowenfield before the next court hearing which is set for August 14, the case will proceed to a preliminary inquiry to determine if there is sufficient evidence for the Chief Election Officer to face trial by a judge and jury.