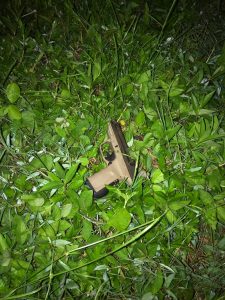 The gun that police say was found next to Dominic Downer after he was shot dead at Nandy Park where he invaded a home and robbed a family.

Police say they are looking for Downer’s accomplice.

Downer was shot dead by a public spirited citizen, who is a licensed firearm holder,  during an armed confrontation at the scene at about 8:30 last night.

Investigators say they have since found a cellular phone belonging to one of the robbery victims and an unlicensed pistol with three live rounds next to Downer’s body.

Police say stringent efforts are being made to apprehend the other suspect who managed to flee the scene.