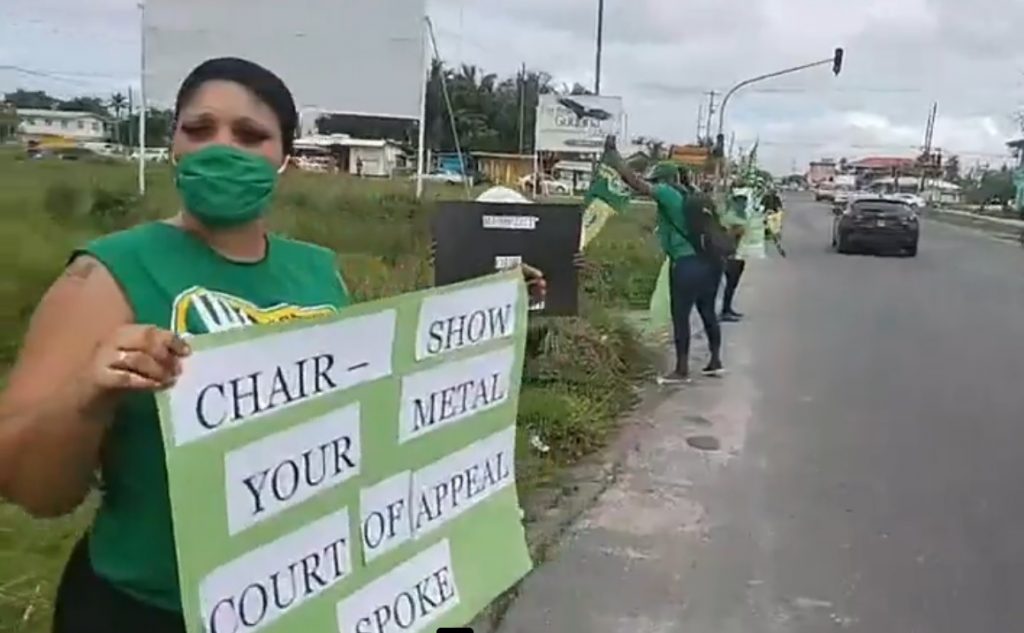 There are countrywide protests organised by A Partnership for National Unity+Alliance For Change (APNU+AFC) to press home its position that the Caribbean Court of Justice (CCJ) does not have jurisdiction to hear an appeal in the “valid votes” case by the People’s Progressive Party (PPP).

Buxton and Agricola are known to be coalition pressure points.

“My vote got to count,” “valid votes,” “No foreign interference, we need to breathe,” and  “Respect our sovereignty,” and “CCJ must go, a bunch of gangsters,”, “CCJ must respect Guyana’s constitution,” are among the chants and slogans by supporters.

Police subsequently asked a number of protesters to disperse in keeping with the COVID-19 orders on social distancing.

Executive member of the People’s National Congress Reform (PNCR), Aubrey Norton stayed clear of committing the coalition, which includes his party, on whether it would accept the CCJ’s decision if it not in keeping with its expectations. “I don’t know what will be the coalition’s response… The coalition will operate based on law and the coalition is clear as to what the law says,” Norton told Demerara Waves Online News/News-Talk Radio Guyana.

Norton, who is a former Political Science lecturer, was asked  to forecast the political conditions in Guyana if the coalition loses the case. “I would say the political landscape will be determined essentially by the political actors in Guyana and whichever way the decision goes, there will always be political negatives and positives,” he said.

Norton is  confident that the CCJ would abide by the law, but if the panel of judges fail to do so, that could spell doom for the regional court. “I know it will trigger a crisis for the CCJ because, don’t forget, only four countries so far have acceded to the CCJ (in its appellate jurisdiction). That suggests that there are question-marks over the CCJ and its ability to operate impartially,” he said.

At the same time, Norton was confident that the coalition would win the case on the grounds that the CCJ does not have a legal right to hear the case. “Once the CCJ is operating based on the letter and the spirit of the law, we are very confident that they have no jurisdiction and if they don’t I believe they will be in contradiction with the law rather than us,” he said.

Optimistic that APNU+AFC would get wide, broad-based support for its stance, the PNCR executive member said he was worried that too much emphasis was being placed mostly on the tabulation of votes instead of the need to stick to the qualitative aspects of the gazetted recount order that  deals with the need to reconcile votes with counterfoils, stubs and voters lists as well as weed out claims of impersonation.

When Norton was reminded that CCJ Judge, Jacob Wit has already opined that the recount order appeared to collide with the recount provisions of the Representation of the People Act, he brushed off that perspective again arguing that “they fail to recognise that they don’t have jurisdiction.”

The PNCR Executive Member expressed concern that the CCJ failed to first determine whether it had jurisdiction instead of hearing the merits of the substantive appeal at the same time. “The approach taken by the CCJ was wrong and that might have allowed some people to conclude that they wanted to create an opening for the PPP. If they were operating based on law, they would have heard the  jurisdiction matter before getting into anything substantive,” he said.

President David Granger has  continued to maintain that he would abide by any declaration by the GECOM Chairman. Mayors in APNU+AFC strongholds of Georgetown, Linden, Mahdia and New Amsterdam have jointly called for GECOM to officially declare Granger the winner based on a report submitted by the Chief Elections Officer, Keith Lowenfield to the GECOM Chairman.

The CCJ has since issued an order blocking GECOM from declaring results until the hearing and determination of the appeal on what constitutes valid votes for the election of a President for the March 2, 2020 general and regional elections.