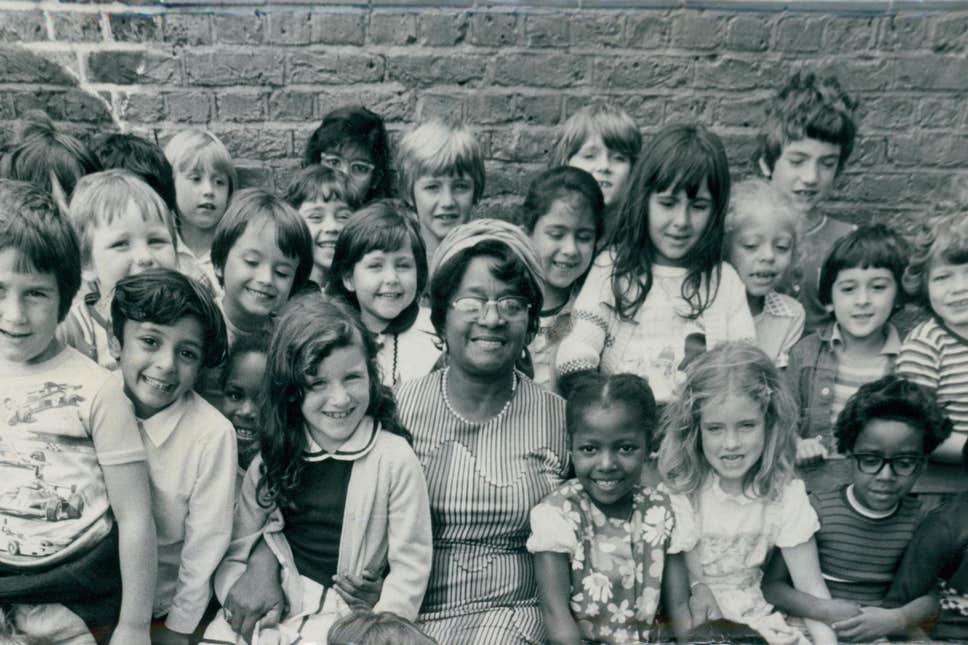 Ms Gilroy, who emigrated to London from Guyana as part of the Windrush generation, was head of the primary between 1969 and 1982 ( The Estate of Beryl Gilroy )

Hundreds of north London parents and former pupils are calling for a primary school named after an 18th century slave owner to be rechristened in honour of one of London’s first black headteachers.

Beckford School in West Hampstead is believed to have been named in the 1920s after William Beckford, a former Lord Mayor of London who owned an estate in Jamaica with more than 3,000 slaves, or his son, an artist who lived off proceeds of the estate.

Following worldwide Black Lives Matter protests in the wake of the death of George Floyd in Minnesota, statues to slave owners have been torn down in cities as far apart as Bristol and Virginia.

Universities and schools are now being pressured by parents and pupils to take down statues of slavers – and to change the names of institutions named after them.

In the past week more than 500 parents have signed a petition calling for Beckford School to be renamed after former headteacher Beryl Gilroy, who took over at the school in 1969.

Parent Steve Hogarth launched a petition to both the school and Camden Council online, stating that re-naming the school in Ms Gilroy’s honour would “be the perfect way of addressing contemporary concerns while also honouring the school’s history of successful inclusion and diversity”.

Ms Gilroy, who emigrated to London from Guyana as part of the Windrush generation, was head of the primary between 1969 and 1982. An education expert, Ms Gilroy – who died in 2001 aged 76 – was made an honorary fellow by the Institute of Education.

As well as a headteacher, she was a novelist and poet who The Guardian described in an obituary as “one of Britain’s most significant post-war Caribbean migrants”.

She took over at Beckford around the same time Yvonne Conolly became Britain’s first black headteacher at a school in nearby Highbury.

Along with all Labour-led London councils, Camden this month announced a cross-party review to re-examine statues, monuments and place names in the borough.

The school has confirmed it will look to consult on a potential new name, and any formal renaming would take place in September 2021. Headteacher Sam Drake also told the Standard the school is already planning to paint a large mural to Ms Gilroy.

Dominic Dawes, a former pupil who attended the school between 174 and 1982, during Ms Gilroy’s tenure, said: “Beryl Gilroy was absolutely central in fostering this culture in the school and among the wider community.

“She inspired pupils, teachers and the community alike, and was a pioneering force in creating truly positive and caring community relations between people of many different backgrounds – and at a time when racism in Britain was still rife.

“The name of Mrs. Gilroy is a far more significant part of the history of Beckford school than that of William Beckford. Given the reason has already been taken to reconsider the name of the school… I and many other ex-pupils of the school believe there can be no more perfect solution than to name it after Beryl Gilroy.

“To do so would speak simultaneously to present concerns and past history, and would send a positive message about the school’s past, its present and its future.”

Mr Drake said: “As a school, we stand together with the local authority in rejecting racism. We also believe in educating our children, so that we can move forward together towards an equal society.

“William Beckford is not an individual that we celebrate at school and there are no statues or paintings on the premises. In fact, most of the staff, including myself, were not aware of his significance until very recently.

“Once Camden have reviewed the origin of the name and we are told that it is definitely linked to William Beckford, we will start the consultation.

“Beryl Gilroy is a very significant figure in the history of Beckford Primary School and it understandable that her name would be considered. In my first assembly I referred to her and the children all know about her history.

“We will involve all of the school’s stakeholders: parents, governors, staff and of course children. However, the final decision will rest with the governing body. Camden have informed us that the formal renaming would probably take place in September 2021.

“This will allow us to take into consideration all of the required changes, including uniform and logo.”

Calls have also been made to rename east London’s Branfil Primary School, which is named after a slave-trading squire, while Queens’ School in Bushey, Hertfordshire, has said it will rename a house named after Sir Francis Drake.

Leading private schools including Westminster School have been pressured to address curriculums accused of being “colonialist”.

The TES reported east London’s Sir John Cass Red Coat School last week called “an emergency meeting of the school’s Governing Body…to discuss the legacy of John Cass and consider a proposal to remove his statue and bust located on the school premises and to rename the school”.

Sir John Cass was a philanthropist and merchant who profited from the slave trade.