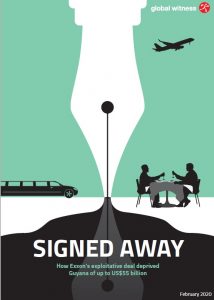 Even as the United Kingdom-headquartered international natural resource anti-corruption watchdog, Global Witness, calls for a renegotiation of the Stabroek Block agreement with ExxonMobil to secure at least a 69 percent equal share of oil revenue, an independent probe has found that ExxonMobil appeared to have withheld vital information about another oil discovery before signing the controversial 2016 agreement.

The UK-headquartered international law firm Clyde & Company’s report, released on Monday, on an independent investigation, essentially states that talks for the 2016 agreement between the ExxonMobil-controlled Esso Exploration and Production Guyana Limited (EEPGL) and the Guyana government were in keeping with Guyanese law. “We conclude that the 2016 Agreement was negotiated and orderly executed in accordance with the Act and the Regulations,” the report states.

The 28-page report, Signed Away: How Exxon’s Exploitative Deal Deprived Guyana of up to US$55 Billion, finds that despite best efforts by the Ministry of Natural Resources and the Guyana Geology and Mines Commission (GGMC), EEPGL largely rubbished most of the Guyana government’s changes and essentially had merely wanted the 2016 accord to be almost identical to the 1999 agreement.

The investigation that was completed in late January by Clyde & Co says ExxonMobil was virtually insistent on quickly concluding the negotiations before announcing that it had found a “world class” well at Liza 2 which could have changed the Guyana government’s negotiating strategy and demands. “It seems to us likely that EEPGL were also strongly driving to have a new agreement signed prior to the Liza-2 well results becoming fully known and understood by the Government. Presumably, knowledge of a “world class” discovery could have altered the Government’s negotiating position,” the report of the independent investigation states. Clyde & Co notes the licence was inked on October 7, 2016.

The investigation finds that EEPGL appears to have put a lot of pressure on the Government and the Ministry of Natural Resources to secure the 2016 Agreement in a short time scale. The reason given, according to the report, related to commitments for drilling rigs that the Contractor Consortium said would need to be stepped away from if a new agreement was not signed.

But, Global Witness accused Minister of Natural Resources Raphael Trotman, who had been responsible for the petroleum sector at that time, of ignoring experts’ advice that a proper assessment ought to have been carried out before sealing a new deal with ExxonMobil.

“Trotman had reason to know that his Stabroek negotiation terms were weak. On Friday June 24, prior to signing the deal, he sent the terms to an oil industry expert for review. Working quickly, the expert responded on Monday the 27th. In a brief, the expert told Trotman that Guyana needed far more information about the value of Stabroek and what a fair deal would be.

Around the same time, Trotman requested advice from a second oil expert. According to the expert, he also told Trotman that the government needed more information about the economics of Stabroek before signing and even suggested where Guyana could get money to hire advisors,” Global Witness says.

Global Witness believes that Trotman knew Exxon would soon announce the results of its newest exploration well – Liza 2 – informing Guyana just how valuable Stabroek would be. In May 2016, Trotman wrote that Exxon had “encountered” “hydrocarbon shows” at Liza 2 and that he understood Exxon would announce its results on a specific day: June 28 2016.

“Yet Trotman does not appear to have effectively used this information to Guyana’s advantage. Global Witness is not aware whether Exxon told Trotman or other Guyanese officials about its Liza 2 find before the company announced them publicly. However, if Exxon did not, then Trotman signed Stabroek only one day before he believed Liza 2 – one of the world’s largest recent oil finds – would be announced. Of course, if Exxon had told Trotman about Liza 2 before he signed, then the minister approved a deal with weak fiscal terms despite knowing that Guyana was now a leading oil hotspot. Ultimately, Exxon did not publicly announce Liza 2 on June 28. But the company did not wait long: only two days later, on June 30, Exxon announced Liza 2 and for the first time told the world just how much oil it had found in Guyana – then estimated at up to 1.4 billion barrels,” Global Witness adds.

Clyde & Co appeared to agree with the strategic geopolitical importance of ensuring that EEPGL/ExxonMobil remain in Guyana due to its inherent links with US government interests and so act as a counterbalance or deterrent against the militarily superior Venezuela that has flexed its muscles against Guyana in the past over its claims to the Essequibo region. “It is understandable why the protection of Guyana’s offshore oil and gas activity in the face of military action by Venezuela became an urgent matter of national security, and in turn why decision-making in relation to these issues was elevated to higher levels, such as the Ministry of Foreign Affairs,” the investigation finds.

On the issue of the controversial US$18 million signature bonus, the law firm found that EEPGL/ExxonMobil insisted that the money must be used only for Guyana’s legal fees in challenging Venezuela’s decades-old claim on the Essequibo region at the International Court of Justice (ICJ). “The impetus for the signature bonus had come from the Ministry of Foreign Affairs. It had been discussed with the Contractor Consortium as Guyana required sufficient funds to fight the territorial controversy with Venezuela in the ICJ. The Government gave assurances to the Contractor Consortium that US$15 million of the signature bonus would only be used to fund the proceedings with Venezuela in the ICJ,” the Clyde and Co report states.

Clyde and Co notes that EEPGL, whose partners include ExxonMobil, Hess, and China National Overseas Oil Company, objected to efforts by the Natural Resources Ministry and the GGMC “was not receptive to the amendments proposed” and objected to “most” of their proposals.

The international law firm notes that Cabinet had April 15, 2016, approved ExxonMobil’s partial funding of a trip to ExxonMobil in Houston by Minister of Natural Resources Trotman, Minister of Business Dominic Gaskin and Minister of Public Infrastructure David Patterson in April 2016. Clyde and Co notes that nothing was wrong with the company footing the bill. “In our experience, it is common for international oil companies to fund (or part fund) the visits of representatives from Governments and other state organisations for legitimate business related travel,” the report states.

On 7 October, 2016, the 2016 Licence was signed between Minister Trotman and the Contractor Consortium.

But Global Witness flayed Trotman for failing to ask for a sufficiently good deal. The non-governmental organisation says his terms were that Guyana should get a two-percent royalty on all of the oil produced. This was only a slight increase to the one-percent royalty required by the 1999 license.

“Trotman’s terms do not include a section on the government’s share of oil production, and it appears – at least in late June – that Trotman was not negotiating for an increase in the 50 percent production share contained in the 1999 license. In total, the minister’s position was that Guyana should obtain a 52-percent share of Stabroek revenues, far below the IMF’s suggested 65 to 85 percent,” the report states.

Trotman had, according to Global Witness, argued for Guyana to receive an US$18 million signature bonus and US$2.1 million in annual fees, including US$800,000 for environmental and social protections.

“For a deal ultimately worth nearly US$325 billion, these terms were paltry. The final deal largely mirrored the same generous fiscal terms Trotman had offered earlier in June, although the company had reduced its annual environmental and social obligations from US$800,000 to US$300,000,” Global Witness states.

Blaming Trotman for signing a new deal without capitalising on Exxon’s weak hand – a move that will see Guyana losing at least US$55 billion – Global Witness calls for an investigation of what transpired. In this regard, the international non-governmental organisation wants the United States State Department to support such a decision by the Guyanese government if it is made. Global Witness says Exxon “needs to come to the table and defending Guyana’s right to get a good deal. But it is critical that this help is seen to be impartial.”

“If the State Department is to provide the support Guyana needs, it should ensure staff are transparent about their experience and that they “encourage a level playing field” during renegotiations with Exxon,” the organisation states.

Previous: RUSAL fires BCGI workers, suspends operations in Guyana
Next: OPINION: Politicians must tackle racial divide head-on. But is it too late?