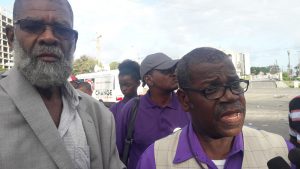 The People’s Republic Party (PRP), a mainly Christian political party, says if it gets its way in the governance of Guyana, it will bring back the death penalty and flogging to help stem killings and other serious crimes.

“It will be a means of deterring people from going down that line,” PRP Leader, Timothy Norton said, while recalling that the Desmond Hoyte-led administration had hung a number of murder convicts.

Pastor Norton said Guyana, as an independent country, could not succumb to the dictates of international human rights advocates. “We, as a sovereign nation, cannot allow the international community to make decisions for us, how we must run our country, how we must own the security of this nation. Guyana belongs to Guyanese and to the mighty God,” he said shortly before presenting nominations to the Guyana Elections Commission for the March 2, 2020 general elections.

The European Union and Amnesty International had been in the forefront of calls for Guyana to scrap the death penalty, and since then, the then People’s Progressive Party Civic (PPPC) administration amended the law to provide for executions only in cases of murder as a result of terrorism and the murder of state security personnel during official duties.

Told that the Holy Bible says “thou shalt not kill,” Pastor Norton rhetorically asked “What we do with those persons if they come into your home and they kill your spouse?” “What about the children, what about the widows, what about the orphans who are being left? What systems are in place in this country to take care of those persons who suffer at the hands of those violent persons and bandit(s)?,” he said.

The PRP, Pastor Norton said, also hopes to tackle violent crime by issuing an amnesty for all illegal weapons after which “we will make sure that severe penalties are being put in place for anyone who is caught with illegal weapons.”

The PRP’s symbol is the lantern, depicting light against corruption.

The PRP said another of its main planks is fighting corruption through the employment of persons who are qualified and possess integrity. “We want to deal with corruption at the top. We want to make sure that we put systems in place for proper accountability,” Pastor Norton said.

Other issues that party wants to tackle includes domestic violence by reshaping and re-educating men so that they can become better role models in the family and community as fathers and husbands.

The PRP is not contesting council elections in regions 7 (Mazaruni-Cuyuni), 8 (Potaro-Siparuni) and 9 (Upper Takatu-Upper Essequibo).