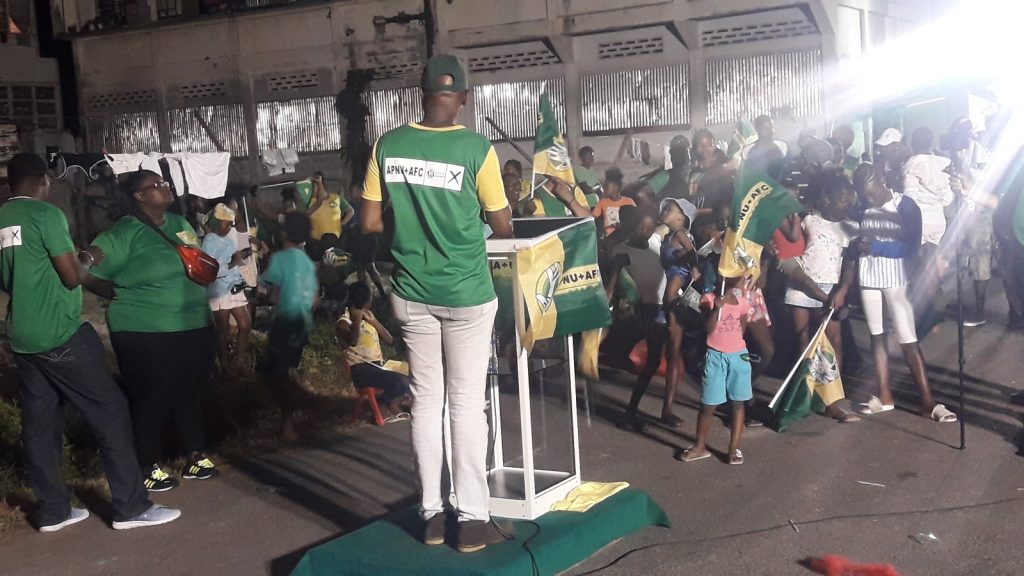 City Mayor, Ubraj Narine Monday night said the governing A Partnership for National Unity+Alliance For Change (APNU+AFC) wants to win the upcoming general elections by 40 seats, even as other coalition speakers listed a series of achievements to justify their party’s re-election.

Addressing about 100 persons in Tiger Bay/West End, a depressed Georgetown community nestled in between Rosemary Lane and Water Street, the Mayor appealed to residents to turn out and vote. “Let us continue to lead the way forward onward to replace His Excellency David Arthur Granger in office, the 2nd of March, 2020, no less than 40 seats in Parliament,” he said.

The APNU+AFC won 33 of the 65 seats in the National Assembly in 2015, and the opposition People’s Progressive Party (PPP) got 32 seats.

Executive member and Director of the National Communications Network (NCN), Michael Leonard said it was not merely about attending political meetings but ensuring that they cast their ballots on March 2, 2020.

Unlike the several other speakers who engaged largely in loose political talk, Attorney-at-Law, James Bond detailed a number of what he regarded as successes by the David Granger-led administration that should lure voters to the APNU+AFC:

“We created jobs for young people and you know what? This is one thing I want to let people know. They look about and say they criticising the coalition government about young people. I tell that’s a lie. If you look at some very key and integral ministries and departments, they are manned by young people…so when they are telling you, they ain’t do nothing for the young people, you tell them they are lying, they are selling you dreams,” Bond said.

Other speakers, including former Chief of Staff of the Guyana Defence Force, Retired Rear Admiral Gary Best highlighted what they regarded as good scorecards by the coalition administration. These include increased access to education, reduced corruption, a cleaner city, e-libraries, few extrajudicial killings, improved water supply and improved security such as the absence of death squads. “The PPP record is about corruption. That is what happened in the twenty-three years. Their record is about extrajudicial killings. That is what happened for twenty-three years and, if for no other reason, the people of Tiger Bay…would vote APNU+AFC is because the country is now safe once again,” he said.

Best noted that PPP presidential candidate, Irfaan Ali has 19 charges against him and PPP General Secretary, Bharrat Jagdeo was complicit by promoting “deceit and dishonesty.”