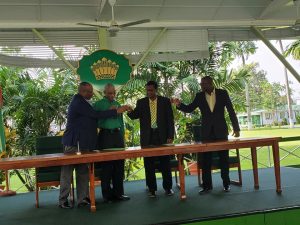 The revised political agreement, Cummingsburg Accord, between A Partnership for National Unity and the Alliance For Change was Tuesday signed secretly by top representatives of the two political parties.

No media advisory was issued for the event that was held at State House, the official residence of Guyana’s President. No post-signing news briefing was held either.

The AFC and its Chief Negotiator, David Patterson merely posted a photograph of the signing on Facebook. For his part, Patterson merely remarked, “First there was a Valentine Day Accord, now there’s a Christmas Eve Accord – four and a half years later the location remains the same (Cummingsburg). Honored to be part of history once again!”

Inking the deal were APNU Chairman, David Granger, AFC Leader Khemraj Ramjattan and Political Advisor at the Ministry of the Presidency, Frederick McWilfred. Also present were Patterson and APNU General Secretary Joseph Harmon, as seen in the photo.

Very little is known officially about the finer details of this revised agreement, except that the AFC will get 30 percent of the seats that would be won at the March 2, 2020 general elections and that Ramjattan is expected to be Granger’s running mate and Guyana’s next Prime Minister if the coalition wins the polls.

The United States Congressional Research Service (CRS), a think-tank for the United States (U.S.) Congress, says some analysts believe that the David Granger-led coalition is likely to win next year’s general elections.

“Past general elections in Guyana suggest the 2020 race will be close, but some analysts contend the APNU/AFC’s multiparty and cross-ethnic coalition is likely to sustain the Granger government in power,” the think-tank says.

Previous: Ethnicity a key factor for Citizenship Initiative coalescing with other small parties
Next: Improved governance expected under revised APNU+AFC accord