“APNU is not against cash grants” from oil revenues but more information needed -Granger; WPA ready to negotiate modified proposal 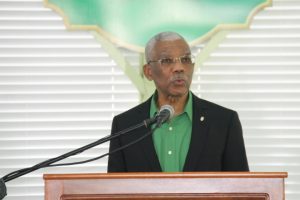 President David Granger on Wednesday sought to dispel concerns that he is opposed to direct cash transfer of some oil revenues to Guyanese, even as the Working People’s Alliance (WPA) signaled that it was ready to modify its proposal with other political parties in A Partnership for National Unity (APNU) whenever those talks begin.

“There has been a lot of speculation and we ask that people put figures to their intention before we make any public discussion but the APNU is not against cash grants. It needs to know more so it can make a proper announcement to the people of Guyana,” the President said.

He said the details on the WPA’s proposal have not been worked out, but “the other partners are not against cash grants but we asked for more information on the details as to who’ll be eligible and how it will be disbursed. “It is not a question of refusal or any conflict. It’s a question of operationalising of that element of what is going to be part of the Sovereign Wealth Fund,” he said.

WPA executive member, Tacuma Ogunseye had publicly challenged Granger to state his position definitively on direct cash transfers after the Guyanese leader had said he had favoured the delivery of high quality free education over handouts.

Granger said the WPA has been asked to provide more information to its coalition partners about its idea of direct cash transfers to Guyanese households with the aim of finding the right balance, but WPA executive member, David Hinds said Wednesday that that more than one-year old request was hinged on a meeting for a presentation to be made but that meeting was never called.

“We need to decide how much will be coming and the profits must be shared with other national needs – infrastructure, other forms of social development, agriculture development and so on – so we don’t know how much we’re getting so we’re asking our partners to address their minds to how much needs to be spent and for what purpose and to whom,” the President said.

Hinds told Demerara Waves Online News/News-Talk Radio Guyana that more than one year ago, shortly after WPA executive member, Distinguished Economics Professor Clive Thomas had floated the idea of giving US$5,000 per household annually, the APNU leadership committee had asked the WPA for a proposal/presentation but no meeting had been set to facilitate that presentation. “Since then they accepted it in principle then walked back on it then belatedly included it in the statement of principles. The latter was accepted by the AFC (Alliance For Change),” Hinds said.

Hinds said the WPA was open to finding consensus in modifying its proposal in negotiations since his party was not rigid on its disbursement model, pegged largely to 10 percent of net earnings of US$1.5 billion to US$2 billion annually if oil is US$70 per barrel. “We proposed the universal model of all households so as not to leave out any vulnerable group. But that is not written in stone. We can figure out the best target group that captures most if not all of the poor,” Hinds said.

The opposition People’s Progressive Party’s General Secretary, Bharrat Jagdeo has since virtually endorsed the WPA model in principle but believed the disbursements should be targeted towards vulnerable groups. Hinds is on record as warning that the governing coalition of which the WPA is a member can lose next year’s general elections if it does not include cash transfers in its campaign manifesto.

Finance Minister, Winston Jordan on Wednesday restated his personal objection to wide-scale direct cash-transfers to all Guyanese households. “I’m against people staying home and receiving a cheque in the mail,” he said. Like Jagdeo, Jordan favours giving more cash to vulnerable groups and creating jobs. “It is for me easier to take that money and create jobs for the same people out of tax than just giving them, hoping they will create it themselves,” he said.

Jordan said he was open to hearing the views of others on the thorny issue of conditional cash transfers and arrive at a common position “that the coalition can run with”. “Right now, different factions in the coalition, different people in the coalition have different ideas… at the table and without people being called ‘ignars’ and idiots and thrash out it there and I could say I am in total agreement with the President that education is the key to bringing people out of poverty,” he said. The Finance Minister said old age pensions based on a means test, and measly retirement pensions should be increased.

Meanwhile, Chairman of the National Toshaos Council (NTC), Nicholas Fredericks has called for special provisions to be made in the Sovereign Wealth Fund for indigenous peoples. He told Demerara Waves Online News/News-Talk Radio Guyana that is key to ensure they benefit from oil revenues when commercial oil production begins in another few months.

“As part of the drive to maximise the benefits of the oil programme, I think the Sovereign Wealth Fund is a very important fund. It needs to have like an indigenous (peoples) component where communities can have access to this kind of funding, develop their proposals and once it is in line with the community sustainable development access, that funding could implement projects,” he said.

Fredericks emphasized the need for government to meet with Amerindian villages to devise possible projects for their local economies. “Have a discussion with the indigenous peoples so that we can develop a financial mechanism, particularly to push the village economies because if villages could have more programmes that are in line with environmental maintenance, Guyana stands to benefit hugely from the maintenance of our forestry through these projects that can be implemented from the oil money for our indigenous peoples,” he said.

Guyana is expected to begin commercial oil production early next year during which oil revenues are projected at US$300 million.